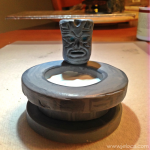 Saturday morning I woke up bright and early to- *coughs* actually no.  Saturdays I sleep in.  But I did wake up somewhere around the crack of 10 or so and debated how to plan my day for the cake.  I had 2 hours until I had to leave to take Henri to a birthday party, then had some shopping to do with Jakob, and then would have to go back out to pick Henri up, so didn’t think I’d get any more progress done until once I’d returned at the end of the day with both kids.  But that was getting close to supper time, which would require clearing the table, so I wouldn’t want anything in progress that would dry up or break if I tried to move it or put it away for a few hours.

The first thing I did was run downstairs and take a peek at the brick wall/cake stand to make sure nothing crazy happened over night, like the entire back sagging off or something.  Luckily, it was fine.  I did realize the colors were much more desaturated and ‘natural’-looking, vs the bright greens of the sprinkles I’d bought to use for grass, and the fondant leaves I’d made.  Hmmm.  They wouldn’t quite go together.  So the next thing I did was to thin some of the leftover dark green from the moss (this is why you save your palettes) and brush it over all the leaves that had stems.  I later wished I’d done them all, but at the time I figured I’d do the ones I knew I’d use, and come up with some way to salvage the smaller ones later on if necessary.  I ignored the long grass strands, having already decided I wasn’t going to use them.

I calculated that I’d have enough time to paint a first coat on the fondant pieces before leaving for the party.  Mostly to just block in the colors and give it a chance to dry while I was out.

The healing spring got a base coat of gray made by mixing Wilton White-White with Americolor black gel, first a quick base and then lightly tapping on some darker areas.  For the center of the spring I used White-White with a bit of Americolor teal.  The crocs got brownish green base coats made mostly by mixing up some of the previous day’s colors together.  It’s hard to see from this pic, but before painting the full croc I used a scribing tool to mark a scale pattern into the hardening fondant.  For the open-mouth one I blocked in some areas of white and red for the inside of his mouth.  I didn’t touch the struggling Pitfall Harry in between his jaws, not thinking I had enough time to pay attention to it before having to stop, get dressed, wrap the gift and shuttle Henri out.

This was the state of my palettes when I left.  The artist’s-style one has pure gel colors that I could dab from as needed.  (The smear at the top was to help me identify which color was which… the darker ones are difficult to tell apart when in one small glob).  The styrofoam piece is what I was really working from, and the plastic hors d’oeuvres palette was there mostly because it still had quite a bit of white left over from the prior day, and a decent amount of brown that was still usable.

Had a minor change in plans – the birthday boy invited Jakob to stay as well, which gave me a few hours of time in the afternoon that I hadn’t expected.  I took full advantage, slapping some more paint down so it could dry.  The main hazard of painting fondant pieces with this White-White/gel colors mixture is that if you apply it too thickly, the White-White forms a latex paint-like ‘skin’ on the work.  If you touch it while it’s tacky (which can last a few days) not only can you leave fingerprints in the work, but I’ve had entire sections of color lift off completely.  Not fun.

Here you can see more of the texture in the croc’s back.  You can also see the other colors added to make it look more natural and create the illusion of shadowy, raised eyes.  I deepened the detail inside the open croc mouth and blocked in Harry’s colors, getting a base coat down so I could finish it with details later. 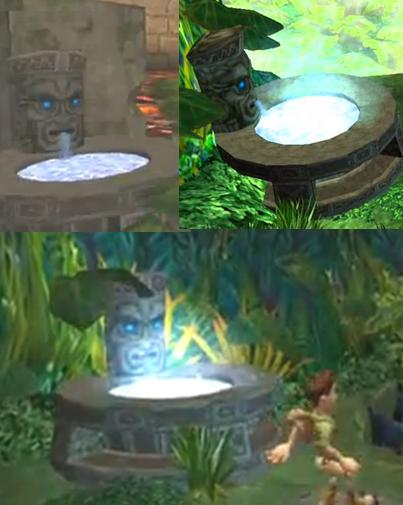 These are the healing springs from the game.  Of course it was only on day 3 that I realized I’d forgotten to make the little side braces that decorate/support the top and bottom.  Ahh well.  Creative license. 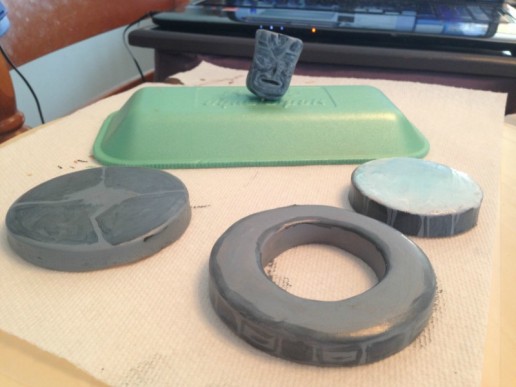 Using the game stills as a guide I darkened the gray with more black and roughed in the decorative areas.  The base had its 4 quadrants, the middle bit got some stripes, and I copied the box pattern around the top slab.  I did my best to copy the dark areas on the face too, as well as I could with my fondant carving.  I left any smudges/smears and added some around the top to make it look aged, like it had been sitting in a jungle for years.

Once the pieces were dry enough to handle I added teal eyes and jammed the head toothpick down through the other pieces.  A tiny dab of water was enough to stick them together.  Looks horrible with flash but it was the only pic that showed the eyes. 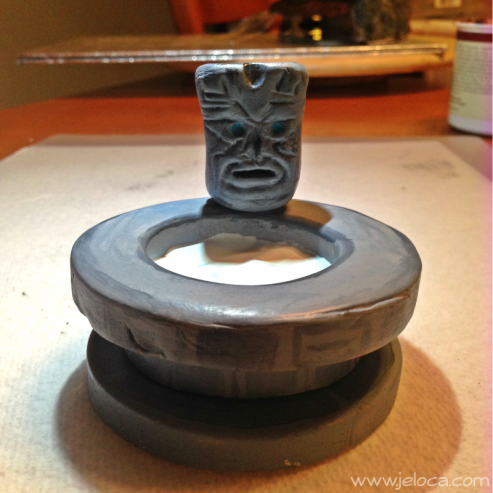 Here’s a shadowy shot that looks most like the game’s version, I think.

And some final beauty shots, because once it goes in the cake it won’t really be seen.  For the ‘water’ I mixed together a few large dollops of Wilton clear glitter gel icing, a drop or so of White-White, and a touch of teal.  Unfortunately the White-White hid most of the glitter, but there’s just enough of the teal to provide the glow.  I really wanted to make the water pour from the head’s mouth but chickened out on actually brushing it down the face.  Ah well.

Now on to Pitfall Harry and his perilous predicament. 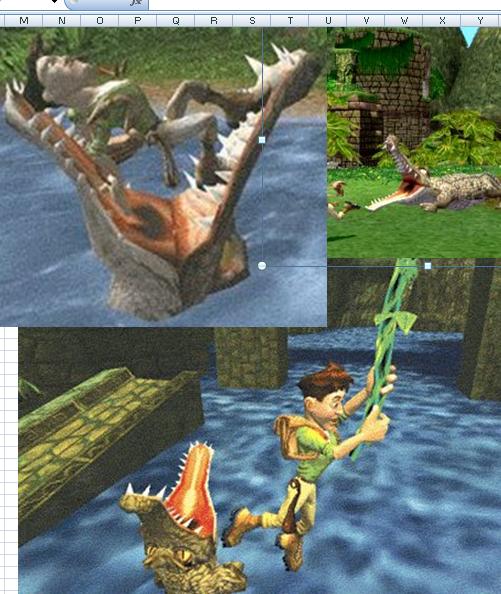 These stills show both the moment I was recreating (Harry in the croc’s mouth) as well as a clear view of his outfit.

And here’s the final Harry piece.  Henri had complained that I’d given him black hair, and ‘everybody knows Harry has brown hair, Mommy’… so I softened it up a bit.  I also broke a tiny bit of fondant off the front of his chest, because Yannick asked me why Harry’s curves were so… Madonna-esque.  I tried to justify that he was straining, back arched… showed the pic… bent over backwards to show him… but other than laughing at me he wasn’t convinced 😛  I touched up Harry’s details and gave the croc an eye and more depth in his mouth.  The very last thing I did was to add a few more coats of white for the teeth, because White-White has a habit of absorbing base colors.  To make it opaque I actually used a small dab of thinned Betty Crocker icing mixed with the White-White, and that seemed to do the trick.

Now I had my fondant toppers, two cakes, and an ornate stand.  All I had to do was figure out how to put it all together.

One thought on “Making a Pitfall: The Lost Expedition cake, day 03 part 1- Pitfall Harry, crocodiles and a healing spring”