Here’s what happened during the week:

After finishing the Sierra Socks last week I immediately cast on for a new pair.  It wasn’t so much that I needed new knitting as I needed new knitting to be ready ‘on hold’ in my purse in case I ever needed it in the future.  Except for very few exceptions, I knit all my socks toe-up, with a short-row heel and toe, from a pattern I’ve long-since memorized.  I’ll refer to past project notes to know how many stitches to work up to depending on if it’s a sock for Yannick or for myself, but otherwise the rest of it is pretty much pick-up-and-go.  I knit without looking so the only parts of the sock that require my attention are the toe and heel.  For that reason, I like to knit the toe before I stash it away in my project bag, so it’s ready at the ‘just knit’ part.

(I’m still loving the personalized travel knitting bag Maaike made for me!)

This sock is going to be an experiment.  I’m using Regia Softy Color yarn that I got at a guild stash exchange a year or so ago, and I’m going to be knitting a heel-less sock.  I get cold at night so I sleep with socks on, usually fuzzy ones from the dollar store.  But then I get hot so I kick them off… and then my toes get cold again so I put them back on.  A happy middle ground has been to push my socks off down to the pads of my feet, so my heels are exposed to the cool sheets but my toes are still kept warm.  Therefore I’m going to see if a heel-less sock gives me the same effect.  If it does, it’ll be a fun way to work through my fun-fur stash.

Some mornings after getting the kids off for school I got a chance to do some coloring.  I don’t have any need to get the calendar pages ‘right’ in any way, so it was fun to pull out a bunch of coloring supplies and just apply color to the pages.  I’m usually a lot more strict on myself when it comes to color placement… or adding highlights or shadow… whereas with these pages I’m not giving myself any restrictions to match any preconceived notions of what the resulting pages ‘should’ look like.

I showed the first page in my last Crafty Compilation, and these are the next few I’ve completed using a mix of Inktense, gel pens, colored pencils and Stabilo 88 and Staedtler fineliners, plus some occasional applications of Wink of Stella or Spectrum Noir glitter brushes. 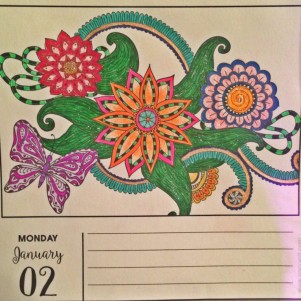 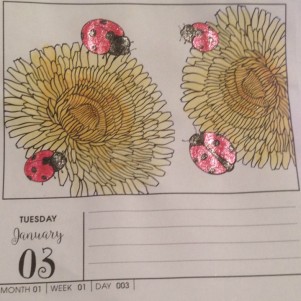 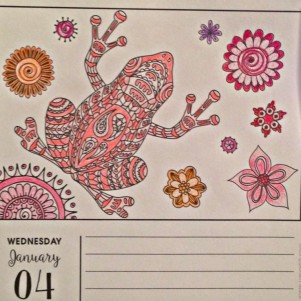 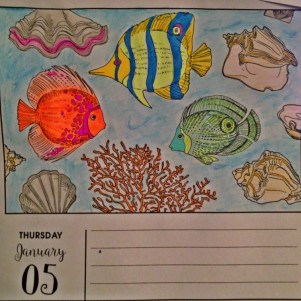 While I was at it I finished swatching my latest batch of gel pens – a 60-count set by Top Quality that I got on Amazon.  There were a few duplicate colors to ones I already had, but also a lot of new shades.  For the price I’m quite happy with the set. 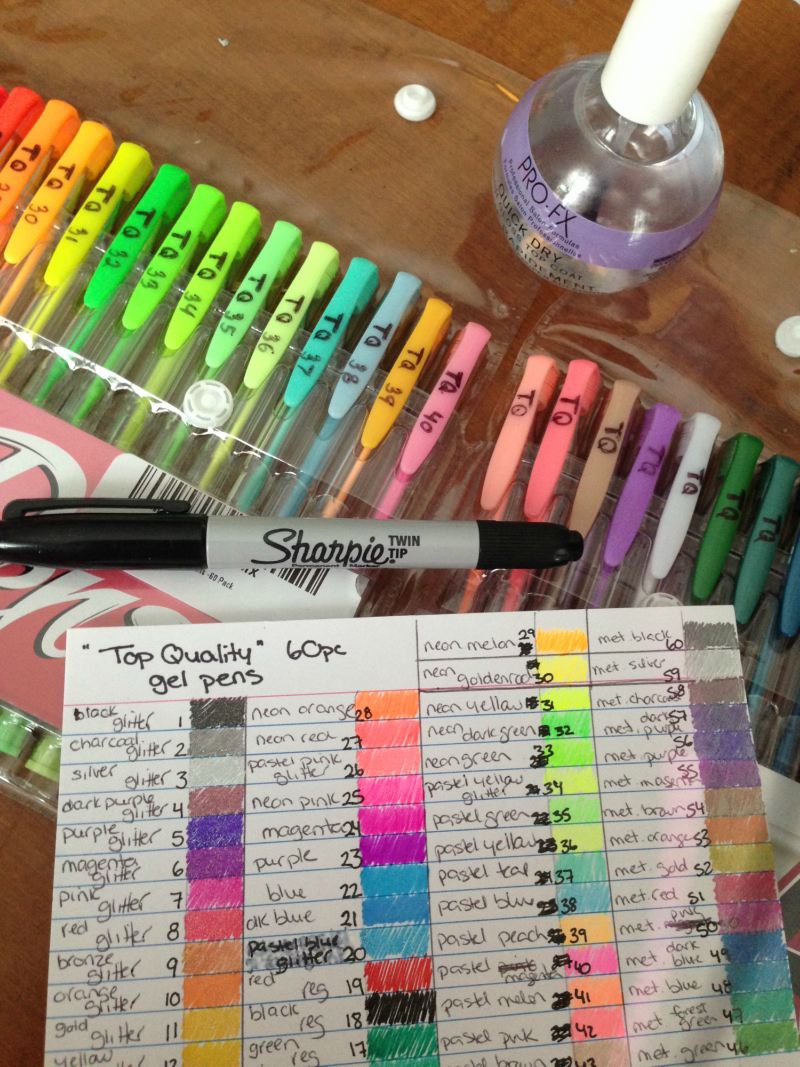 I did want to differentiate between these colors and my Lolliz and other ones, so I used a Sharpie to mark an “L” on the caps of the Lolliz ones and “TQ” on the Top Quality ones (the other brands showed their brand names on the caps or pens).  Then I followed that up with a layer of a clear nail polish topcoat to help prevent the writing from rubbing off too quickly as I used the pens. 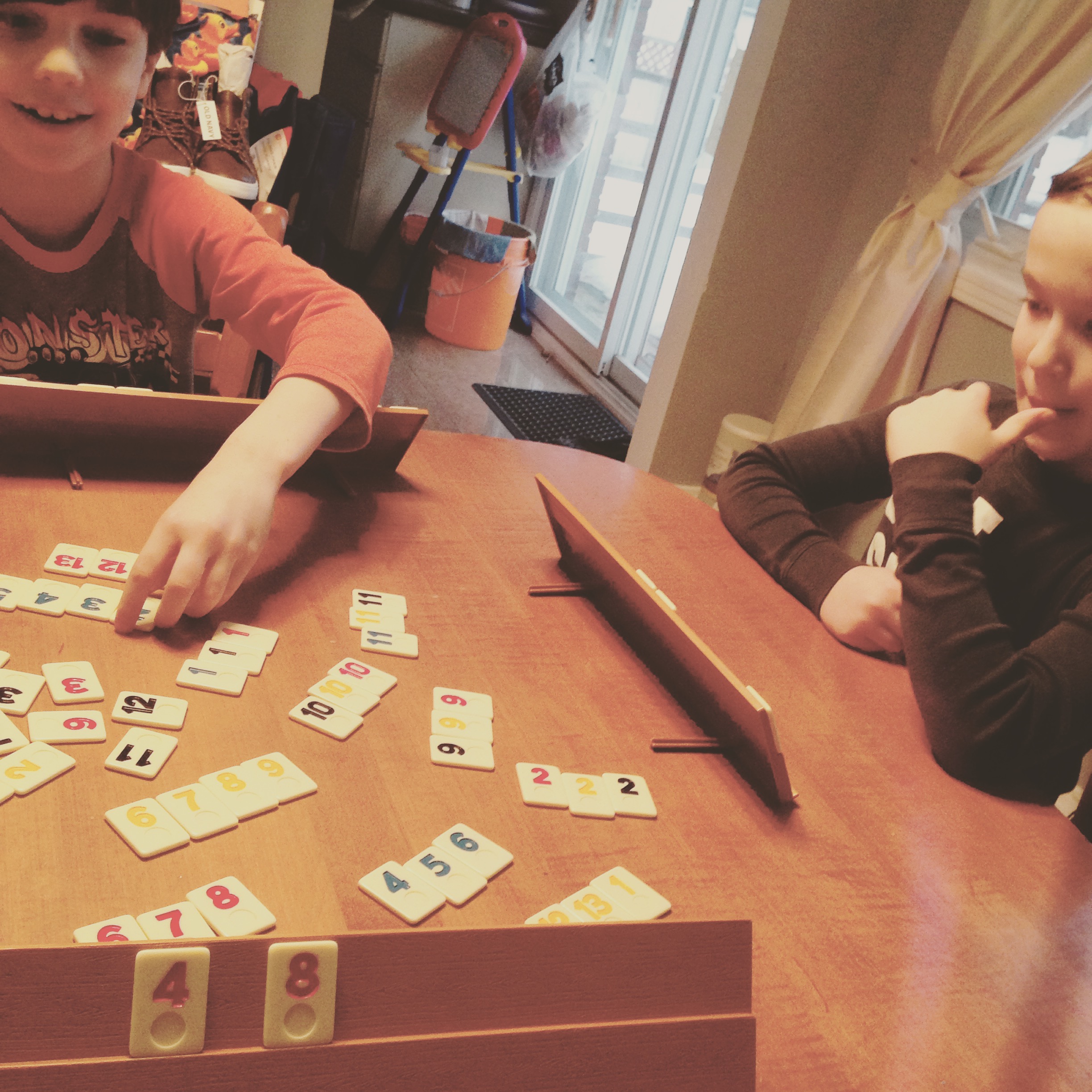 I grew up playing Rummikub (we called it ‘Rummy-Q’), and I have fond memories of being my kids’ ages and playing with my Bubbie, so on Saturday afternoon after the kids had finished homework and  had lunch I taught them how to play.  We did one open game where I gave them a few pointers but then played two full games with our tiles hidden, and they’d picked it up perfectly!  In fact- Jakob won the open round as well as one of the closed ones!  It was awesome to see them playing the game that had given me so many good memories with my grandparents, and to spend technology-free time with my kids.

I had an idea the other day that I’d love to share with anyone interested in coloring, journaling or scrapbooking.  It’s something I definitely plan to do over the upcoming year, and I’d be so happy if anyone else made it their habit as well.

One of the gifts I received at our family Christmukkah Day (Christmas/Hanukkah/Birthday) gift exchange this past weekend was this Creative Coloring Throughout the Year 2017 desk calendar.  It’s one of those ‘page-a-day’ type, like the knitting calendar I’ve had a pattern published in in the past.

The top two-thirds of each page contains lineart to color in, below which is the date and a small lined section for making note of appointments, or birthdays, etc.  The images are detailed enough to have fun with but not too large so as to be daunting at the thought of ‘having’ to complete an entire one per day.  They’re sized perfectly for fineliners or sharpened colored pencils, though I found I was able to use the broader nib of gel pens in mine without too much fuss.

Now, when I first opened it I was initially really tickled at the prospect of a small bit of coloring I could look forwards to daily.  I even thought it might be fun to bring to work, to perhaps have a little something to scratch at with my ballpoint pens during lulls in the day.  Then it hit me- I don’t want to throw out something I’ve spent time and effort creating (and don’t let anyone tell you differently- coloring in is still creating).

But what could I do with the pages?  Of course, being a crafty person, ‘scrapbooking’ was one of the first ideas that came to mind.  However one insanely expensive all-out scrapbook in the past was enough to convince me I am so not interested in scrapbooking, which my wallet is quite thankful for.  So keeping the pages merely for the sake of keeping them was out, especially since I’m trying to pare down this year, not accumulate more clutter. So I wondered: was there anything I could do to make them useful? 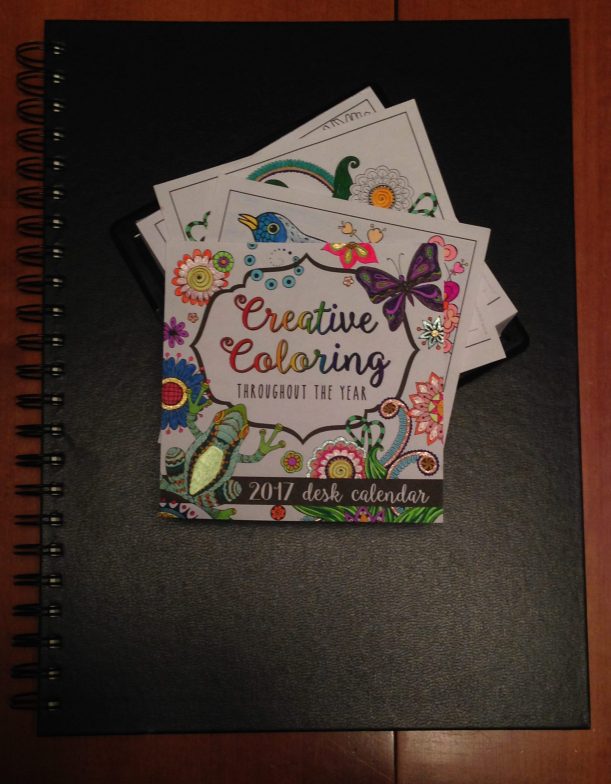 And then it hit me…an idea that’s simple enough for children to do and yet so sweet that I hope others will like and benefit from it as well: a gratitude journal.

The plan is simple.

After I color each day’s page I’m going to use the notes area to jot down something I’m thankful for on that day, or a few things that made me happy.   Then I’m going to glue them down into a scrapbook (in my case the 80-page sketch book from my local Dollarama).

I’m so excited about this.  At the end of the year at worst I’ll have a bunch of pretty pictures to look at and at best I’ll have some great memories to treasure.

As you can see I’ve only got a few images colored so far, so I’m already behind, but my aim for coloring each day’s lineart is way more therapeutic than technical, so I’m not trying to create any mini masterpieces.  As such I’m planning to get through the outstanding days’ pages as quickly as I can so I can start properly and keep it current.

I would really prefer to have two days per page instead of three as shown above.  With four images per sheet (two on the front, two on the back) the 80 pages the scrapbook holds would only give me the ability to store 320 days…not quite enough for one full year.

I’ve got more of these books, though, so at some point I plan to swipe the missing pages from another sketch book and ease them into this one so I can have the entire year together.

Above you can see the days I’ve already colored, and here below is a sneak peek at January 4th.  The others were done using fineliners and gel pens, but this one I’m doing with colored pencils and using varying amounts of pressure to get different shades within the image.  For example, the frog was colored with only one pencil, pressing harder in some spots and lighter in others.  Same for the flower, and I’ll be completing the image the same way.

As you can see it’s not about the media nor the execution, it’s merely about the process.  The act of putting color to paper while letting your mind wander… letting the day roll off your back and allowing yourself to focus only on the wonderful memories that you want to commit to paper.

I do hope you liked this idea and if anyone plans to start their own coloring calendar journal please let me know in the comments, I’d love to see it!

And here’s the full plan in an image for my fellow Pinners.