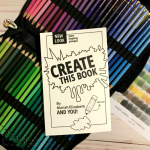 October’s Create This Book challenge page was a fail from the start, because we should have picked a page we could complete with a Halloween theme. Fail #2 was not posting it within the actual month of October. But the page itself isn’t a fail, because I’m really happy with how it came out!

For anyone not following, every month in 2020 my 11yo son Henri and I are choosing a page from Moriah Elizabeth‘s Create This Book (vol 1) and each of us completing the page in our own books. There’s a link to all past pages at the bottom of this post.

For this month Henri picked the “favorite cartoon character” theme on page 175.

Henri’s still on a Henry Stickmin kick and drew a few moments from the game. He traced a glue stick to get perfect circles for Henry, Ellie and Charles’ heads, and then freehanded the rest.

I love how easily he’s able to recreate what he sees freehanded (and often without reference photos), and I especially love the touches he added like the shadow under Ellie.

I was going to sketch up Harley Quinn but decided instead to go with my girl, Betty Cooper (from the comics, not the show). I found an image I liked online, and I’ll be honest- I was going to trace it. I was in the mood to color, but not to draw so I planned to take the easy way out.

And then I decided to draw after all, and accept however it turned out.

I started by sketching the outline of the face and then started blocking in the features.

Thickening the lines to match the widths of the comic really did a lot to make it look more accurate, though it did take me a lot of erasing and redoing until I got it to a point I was happy with.

It’s not quite perfect – her face should be longer so she’s a little squished between the nose and chin… but all in all I’m happy with my accuracy.

I filled in the inking lines with the brush end of my Feela markers. (There will be a full review on those coming soon, I’ve been using them a lot and really love them, especially for coloring book fans). Adding the black lines really helped me to see what worked and what didn’t. It still looks pretty good, but I can still see the shortened face.

The paper in this book is thin, and the water-based marker does bleed and ghost. But the page on the back asks one to “attach” something so I don’t think it will be an issue to cover in the future.

The next step was coloring, which I was really down for. I was watching the Big Brother 22 (All Stars 2) finale and it was something relaxing to do while enjoying the drama on screen.

Betty’s pretty simple, in terms of color. No shading, no highlights, just block color fills in the outlined areas.

I could have left the page as-is, but long-time blog readers will know I’m growing addicted to colorless blenders. I have a bad habit of “saving” things I like and not using them, and I’ve been trying to force myself to USE these things and not worry I’m “wasting” them by using them for their intended purpose. (Plus, it’s 2020. If ever there was a time for enjoying the little things, it’s now!)

Here you can see the difference before and after. Betty’s face was colored only with the Polychromos, but her neck has been gone over with the colorless blender. Just colored as you would normally, only instead of adding pigment, it blends the existing pigment together, smoothing it and filling in the white areas left on the paper. (Effectively, this burnishes the coloring, so you only want to do this after you’re done coloring, because it would be very difficult to lay down any more color afterwards).

Here’s Betty after I’ve blended the whole page. It really transforms the look! I find it makes it look more complete, and more professional. I’m always looking to improve my skills so these blenders are one tool I’m thrilled to have discovered.

Finally, I went back over some of the black lines with the brush end of my marker, to touch up areas where I’d gone out of the lines and the colored pencil showed on top of the borders.

September has come to and end, so now it’s time to share mine & Henri’s year-long challenge of doing one page from Moriah Elizabeth‘s Create This Book (vol 1) each month. There’s a link to all past posts at the bottom of this post. For this month Henri picked the “shared drawing” theme on page 88.

Henri went first and drew this for me to complete:

(The right page was completely blank, but I forgot to take a photo until I’d already started sketching). It’s a dabbing dude wearing a Henry Stickmin dabbing shirt. (The Henry Stickmin Collection has been all over YouTube these days as assorted gaming channels play through, and the boys have been enjoying watching their favorites find every fail).

For my side (the right) I did my best to copy Henri’s style and make it look like one complete image. I think I did pretty good! (And I can use the excuse of copying the style to excuse my horrible hand drawing LOL)

When it came to my page, I decided to make Henri have to think and be creative.

I drew an iphone and told him he could draw any app he wanted on it’s screen. He decided instead to draw the lock screen, and I love it!!

In keeping with the Henry Stickmin theme, he drew Henry doing the Distraction Dance… specifically the one at 0:49sec here:

He did so good! He put the time, the date, even the “swipe to unlock” at the bottom… he even remembered to put the little connection etc icons at the top! I love it.

He did so good I don’t even care that he used permanent markers that bled through the page. I’m always in awe of his talent and I’m really happy that I have this drawing in my book to keep. 🙂

And that’s our challenges for this month. He’s already picked out October’s, so we can get started on them early for a change.