Mommy with Henri at 18 weeks old.

Week 18  brought Jakob’s birthday and a fun little party at his school, then a fun little party at my parents’ house since they would be out of town on the day of, then a fun little party (with a trip to the pet store to look at the animals) on his actual birthday.  I miss such celebrations for MY birthday!  Thanks to Daycare Disease we were all sick around here, and those of you with husbands know there’s nothing more pitiful than a hubby who is sick.  When Mommy is sick the world doesn’t stop turning, and every little sniffle isn’t cause to down a bottle of Advil Cold & Sinus…I’m just sayin’.  Anyhoo…the colds eased up and just in time, ‘cus week 19 was crazyness around here!

I was busy knitting non-stop for the 2 weeks, but couldn’t show any photos ‘cus my swatches were for submissions to the Winter Twist Collective.  I don’t know if I’ll get accepted, but keep your fingers crossed for me!

Once the submissions were in I got down to work on the plans for Jakob’s party this past weekend.  We were doing a party for his friends (ok, our friends and family with kids the same age) at a local play area, followed by lunch and dessert here at our place for our close family.  That way those without young kids didn’t have to hang around at the kids’ playground, bored.

I whipped up a batch of cupcakes and debated how to decorate them.  We’d sent out pirate invitations for Jakob’s party, and my mom had found similarly-themed table cloths, napkins, plates, etc.  I knew I wanted to do pirate cupcakes and for a long time the plan was to ice the cupcakes then put some white icing in a bag and pipe a skull & crossbones onto each one.  Thank god I talked to my friend Jessa who quickly extolled to me the joys and wonders of working with fondant.  I am now a convert! 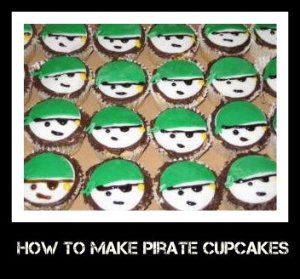 What do you think?

I made 42 of them, and they seemed to be a big hit at the party.

Jakob really enjoyed chowing down on his first of many desserts that day!  He blew out his candle by himself and polished off the entire cupcake before getting into the other desserts and fruit. 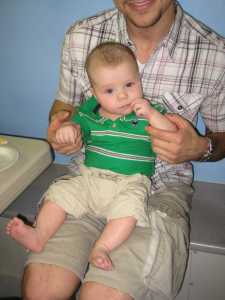 Henri couldn’t have any dessert so he spent the time hanging out with his uncle Mike.  I love this outfit on him- doesn’t he look like he just got back from a round of golf?  I swear, he does NOT look like a 4-month-old!

Not our best shot, but here’s one of our little gang.

Mommy with Henri at 19 weeks old.

I’m a few days late for that photo, but we’ll pretend it was taken on Thursday, m’kay?

After the playground we came back to the house to prepare for the onslaught of family (and I mean that in a good way!).  There was much (more) food and laughter and meowing from Sam who was locked in the basement.  When it was time for dessert (again!) I brought out Jakob’s cake.

I’m so proud of this one!  My first official fondant cake, and I LOVE how it came out!  It was so much fun and so easy to do!  Here’s what I did: 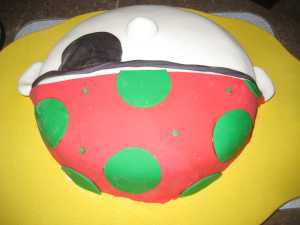 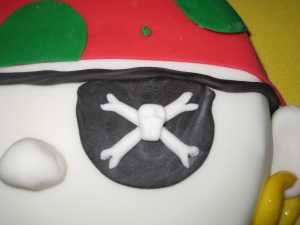 And that’s it!  It took me about 2-3 hours from the second coat of icing on the cake to “gluing” the 4 cupcakes onto the platter with dabs of leftover frosting.  It was totally easy and a very rewarding experience.  Plus a little fondant goes a LONG way, and I have a bunch left over so  I am already planning to make more cakes!

I couldn’t believe Jakob polished off another cupcake, and some fruit, plus a cookie, all after having lunch when we got home after the first party where he’d ALREADY eaten an early lunch and had dessert.  No wonder the kid never napped that day!  He was wound up on a sugar high and exhausted, but we were so proud of both he and Henri.  They were both so well behaved at both parties!  Even though there were over 40 adults and 25 kids running around, neither one freaked out or had a meltdown.  Jakob was polite and didn’t grab at the food or the toys, and even when sleepy later he just lay on the couch next to us commenting excitedly about his new stuff as we opened his gifts with him.  They truly are great kids (ok, I’m biased) and they made us really proud. 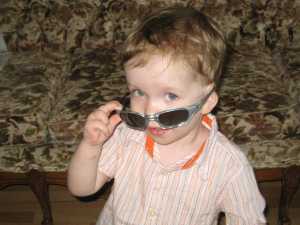