Continuing to add Henri’s backdated birthday cakes as we count down to this year’s party, here’s the cake I made for his 2nd birthday, which had a The Wiggles theme.

I’ve posted about the party before, but sorta glossed over the cake, so here are some more details.

The first thing I did was to cut out a LOT of man-shaped cookies.  Each invitee was going to receive their own set of Wiggles characters in their lootbags, and I needed to have extra for the cake, and in case of breakage.  Once the cookies had baked and cooled I tinted up some homemade royal icing and got to work.

A little while later I had these guys.  (The black icing marker details were added a few days later, to make sure the icing had dried enough).

Once thoroughly dry, the cookies were packaged up and attached to assorted coloring books to be given out after the party.

Then I was on to the cake.  I had rented a Wilton 3D Cruiser cake pan from our local cake supply store.  I baked the car-shaped cake out of chocolate cake mix, and for the base I baked a 9 x 13 sheet cake out of vanilla cake mix, as I wasn’t sure the car cake pan itself wouldn’t be enough to feed everyone.  It took 1.75 boxes of cake mix, but it’s an odd shape, so I couldn’t guarantee it would be cut in a way that would give enough slices.  It took me about 3-4 hours to make my own buttercream icing, tint the colors I needed, crumb-coat and then decorate the cake.

The cake as baked wasn’t a convertible, so I used a knife and carefully cut it into a more appropriate shape for what I was trying to duplicate.

I remember being panicked that I wouldn’t be able to ice the cake smoothly, which is why I’d ended up filling it all in with a star-tip in my piping bag. 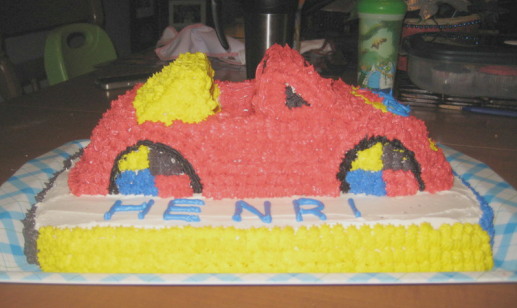 I copied the Big Red Car’s colors off a DVD case we had at home, and used leftover of the 4 main icing colors to cover the sides of the base cake.

The logo and the front windshield were the only two spots I dared attempt to smooth over.  After the basic shape was down, I piped the letters with a narrow round icing tip.

I waited until right before serving to add the 4 cookies I’d reserved, as I was afraid they would absorb moisture from the cake and crumble or break at the attachment points.  So I brought them to the party in a flat tupperware and stuck them in at dessert time. 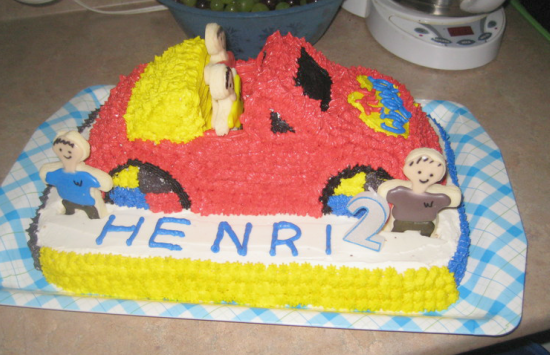 I let Murray have a chance to drive. 🙂

Henri’s other birthday cakes so far

5 thoughts on “The Wiggles cake”