Remember back in October I showed a pic of my mom’s birthday cake?  And said how I would post more on it later?  It’s later!

(Today was actually a pretty fun and busy day.  I stayed home while Yannick took the kids to swimming, and started cooking the food/making dip/etc for Henri’s 3rd bday party tonight.  Once again I only used my camera, not cell phone camera, and don’t have it handy or the pics uploaded.  At least this post is about another birthday, and another sweet treat.) 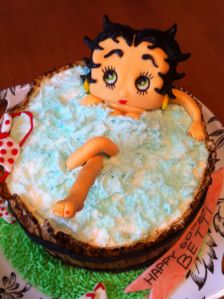 This is the cake my sister Laura and I made for Mom’s 60th birthday.

I made the cake part, then Laura helped to decorate.  First I baked 2 (9″?) round cakes, both vanilla but one tinted red.  I wanted them a bit more dense than a regular box mix, so while I did use Betty Crocker mixes, I doctored them with less oil and added instant pudding mix.  That was on the Thursday before the party (Sunday).  On Friday I made a batch of buttercream, leveled the cakes, torted them (sliced them in half widthwise) and iced in between, stacking them, from the bottom up, red, icing, white, icing, red, icing, white.  I wanted a white layer as the top so none of the red would show or seep through the top layer of icing, just in case.  I then gave a quick crumb-coat over the whole cake.

I had more time that afternoon, so I started decorating.  First I took some of my leftover icing and tinted it a pale blue, then set it aside.  I rolled out white fondant until I had it almost long enough to go around the cake.  It took me 2 strips to go around the width, but I made the seams look like seams in the wood, so you can’t tell.

I dabbed the back of the fondant lightly with a q-tip in water, and pressed onto the sides of the cake, smoothing well to remove any air bubbles.  I put the cake in the fridge for a bit to set up.

Once the icing had crusted over I went back over it with the blue icing, mixing the two with my knife as I went, and chopping it up a bit so it looked frothy and bubbly.  Then I sat down to do the wood grain.

First I went around the cake, using a sharp knife to score the fondant lightly to look like the individual wood slats.  I went around the top edge and made little cuts as if the wood was weathered and beat up.  I went around the cake again with a black edible ink marker, randomly making little lines and drawing knots in the wood.   Then I used a food-only paintbrush, some water, and some brown icing gel and covered the sides and top completely.  First I’d use almost a 100% concentration of gel to go over the score marks, then I’d blend it out with the water, and some gel-tinted water.  I made sure to have it darker in some areas, lighter in others, and tried to make it look old and used.  The way the water reacts with the fondant leaves it glossy, so it looked like it has been shellacked. 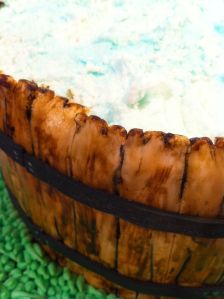 Two black fondant “bars” with silver “nails” finished up the hot tub, and then I used some green icing in a squeeze bottle-thing to individually pipe each and every blade of grass to decorate my dollar-store platter. 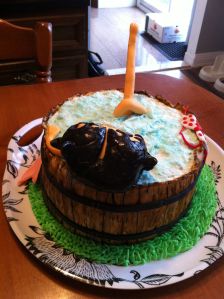 Laura came over late that night once she got home from work, and she made Betty Boop’s head while I made the legs, arms and accessories. 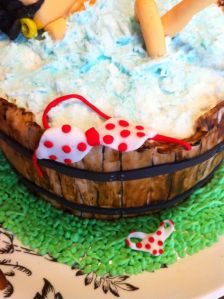 The bikini and flip-flops were planned, but the boobs were a last-minute addition ‘cus she didn’t look properly “settled” in the tub without them.  🙂

And that was Mom’s cake.  We had made it secretly and Yannick delivered it to the brunch her friends were throwing, and she had no idea it would be there.  I heard it was a big surprise, and a big hit.  They were almost against cutting into it, but they did, and they ate it, and even saved me a nice, tall slice.