My ball of Zauberball is insane.

Remember what it looked like in ball form?  Lots of pink, blending from nearly-white, to deep…and right in the middle was a bright Spring green.  It was the combination of the colors that I fell in love with, so bright and cheery.

When Maaike and I wound the yarn, we made sure to divide the whole ball evenly in half, and then rewind one of the halves from the outside-in, so the colors wouldn’t pool in the same direction.  I was immediately enchanted by the stripes, and was picturing sections where light pink met green, dark pink met light pink, light green met light pink, in my head it was a beautiful sort of controlled chaotic madness that I couldn’t wait to see on my feet.

I finished the first foot, and so as not to mess up the striping (that I was working from the inside of the ball) I did the heel from the outside of one half-ball.  Since my last stripe was light, I chose the ball that had a lot of dark pink on the outside, and did a short-row heel.  I put a stitch marker on that ball to remind me to use the other ball for the other sock’s heel, and started to knit a few more stripes when I realized something.

My foot was all pink.  My heel was all pink.  And if I looked at the yarn still to come from the center of the balls, there was still a LOT more pink to go.  (The lower one is misleading- it LOOKS like green is coming up, but it’s all lies.  There is a ton of pink squished in there).  I don’t like my socks to be too long, and at this rate I’d have one entire sock in shades of pink before hitting green in the second sock.

I had no choice but to cut the yarn.  I did a few stripes after the heel for stability, then transferred the stitches onto dpns and cast on for a new foot.  I decided to keep going from the inside of the balls, and at the very worst I’d have two feet that were entirely done in shades of pink, but at least I’d hit the green by the time I got to the legs, and I’d just make sure both legs had some green in there.  No sweat.

By random fluke I started the second sock with a light stripe, and it gave me the same color-bleed section as the first sock, but still ended up with the stripes reversing, so I had an almost exactly opposite sock from the first one.  (Good think I’m cool with fraternal twins).  When I got to the heel my last stripe was dark, so I grabbed the half-ball that would give me a light heel- which was conveniently the one I didn’t use for the first heel.

I finished the heel and set about to finish the leg, eager to race through it and show Maaike that I’d managed to finish almost a whole pair already(!) when I realized there was STILL a ton of pink to go.  My socks are usually only about 4″ or so up from the heel, including ribbing.  I find more is a waste, and I’d rather be on to knitting something else.  There was no way I’d even get a hint of green in this pair.  What would I do?? 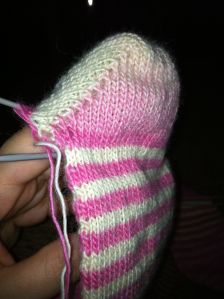 When I knit the second short-row heel, the yarn was so light that I didn’t realize it wasn’t at it’s lightest tint yet.  While I was knitting I was barely able to see the subtle graduation from pink to barely-pink-white, and the more I looked at the heel the more I really liked seeing the colors fade like that.  Not many sock yarns do a true fade or blend, very often it’s just a chunk of one color followed by a chunk of another.  I find it’s a show of dyer’s skill (well…when hand-dyed anyways, not sure what the Zaubby process is) to get a soft blend, plus I really like the look.

What if I were to knit yet ANOTHER sock foot?  The pink I had in the center of the first ball was at the lightest shade, but not too far off from getting darker.  And eventually it got light again before transitioning into green.  What if…Ok, this would work!  I’d knit another sock, only I’d do the toe in black so I wouldn’t waste the color change on the narrow toe part, plus it would keep me from using up too much yarn in the second pair, ‘cus I still need to finish the first.  I’d knit the foot with the center of just one ball, to get the full gradient effect.  When it was time for the heel, I’d work another short row heel, maybe in black again, so I would save the yarn, and also ‘cus it would set off the colors nicely.  I’d work the leg until I had enough green (ha!) and then do ribbing in black again, and put aside all the Zaubby left from that sock.  I’d use the remaining half-ball for another one with black toe/heel and in the end I’d have 2 left-over balls that I could use to finish the striped pair.

It’s a lot of work, but boy I’ll be getting my money’s worth from this ball of yarn! 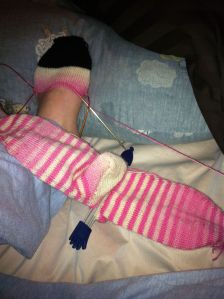 Here’s where that got me.  On the dpns are both striped feet, awaiting legs.  On my foot is the beginnings of the 2nd pair, working a lovely blend of colors.

Except…look at that giant chunk of pink!  I’d have to knit that entire section of shades of pink before getting to even a hint of green.  There’s no use.  I’m going to have to cut again.

In other news, I’m doing ok.  My belly still hurts but hey- the surgery was only on Monday.  This is the longest I’ve tried to sit up in the whole week and I’m starting to feel a bit queasy so I’m going to go lie down again, but at least I can knit while reclining!  🙂

This coming week is going to suuuuuuuuuuck ‘cus I have to figure out a way to study from big, heavy textbooks in time for our in-person midterm next Sunday.  Once that’s done I’ll still have studying to do, but won’t be as stressed about it.

I still haven’t gotten to my emails, but don’t worry, if you sent me one, you’ll get a reply.  Just not today.

One thought on “wha? where’s green?”