Sorry for the bit of a break.  It’s been a long last 2 weeks here.

The week before last was a dark week for me.  On the 13th (Wed) was my 10 day post-op follow up with my surgeon.  My mom took me to the appointment and he said everything looked good.  Other than being  crazy sore from  the pushing and feeling he does in the exam, I left there feeling pretty good.  I went home and slept off the pain, then settled in for the evening to rest, and that’s when it happened.  I was propped up against some pillows and there was a nursing pillow (Boppy) on the bed that I use to protect my tummy when I’m sitting up, like  at a table.  It was touching my foot and bugging me, so I leaned forwards gently to move it over.  Well moving forwards when I was already propped up put me into a “crunch”-type position, and my (a?) hernia popped out.

So the rest of that week was a wash.  I was feeling very down, very depressed and very upset.  “Frustrated”  doesn’t even begin to cover how I was feeling.  I couldn’t even focus on how upset I was, though, because Sunday the 17th was our year 2 midterm, and I was a little behind in studying.  I couldn’t think of blogging, or even knitting, because every moment I wasn’t sleeping, I was studying.  Between not talking ‘cus I was just in a funk, to not doing anything but read and review, it was a long, difficult few days.

Not even the arrival of a surprise package from a sweet friend could raise my spirits- though it certainly was the brightest spot of the week!   (JayJay– you are so  sweet!  A proper email/thank you and post with photos is coming, I promise).

As soon as the midterm was over we had a chance to relax from school a little, but jumped right into family obligations because Monday and Tuesday nights of last week were the 2 Passover seders.  The kids were awesome and well behaved, and in general both nights went well, but I was sore and the dinners were long.  Even when the kids are good, they are still used to a schedule that starts the bedtime routine at 7pm.  Henri is usually asleep for the night by 7:30, Jakob later but still playing quietly in his bed…and the two dinners only started at 7pm.

Monday also started a commissioned crochet project that I finished on Saturday, but the pics are still in my camera so those will also come soon.

On Wed I had a repeat visit with the surgeon so he could find the hernia I’d felt.  I left there in tears, half from the pain of him poking around, and half from frustration because he couldn’t find it.  It was to be expected, though, ‘cus I’m still too swollen for him to really feel anything.  Either way nothing would be done to fix it for a few months, but it was still just a sucky experience to go through, especially since it had popped out 3 more times since the first time, one of those being earlier Wed afternoon!

All this to say why I haven’t been around the blog or Facebook much, even though I’ve been home.  I’ve barely even been online, other than checking emails.  If you have a blog, and I used to comment on it, don’t think I’m suddenly ignoring you, please.  I haven’t read anyone’s blog in months.  If I can’t sleep in the middle of the night I’ll open up some entertainment blog just for reading material, like Regretsy, Lamebook or Cake Wrecks.  I can just scroll down and keep reading until I doze off, and not worry that I’m forgetting to leave a comment.  If you’re a friend/blogger, I’ll get back to  you soon.  I’m still home for another 5 weeks…

Thursday turned into an unexpected long day.  I’d planned for more of the same- sleep in, lay around the house, watch a bit of tv, doze off, maybe knit a little, repeat.  (I’d make an “it’s a hard life!” joke but this all started with a now-failed surgery that I’ve done for the second time…so I’m not going to make any excuses for taking it easy!)  Instead on Wednesday  afternoon I got a call from the Children’s Hospital telling me that they finally had a date for Henri’s spine MRI- the next day!  Luckily Mom was free to take us.  Poor little guy- he had to fast, and then be sedated for the 45 minute test- but other than crying during the insertion of the IV shunt in his hand (completely understandable!) he was so awesome!  And when he woke up after sleeping off some of the sedative, he was acting like he was drunk- head lolling back, talking about random, nonsense things, etc.  Strange as it is to say, it was a real mix of being really sad (to see him in the hospital crib, drugged up with a bandaged hand) but also really sweet (not that I want him to be drunk!  But he was being really cute and silly, and just plain adorable).  He even charmed the nurses by waking up with a bright smile and being friendly and sociable from the minute he opened his eyes.

The results won’t be in for about a month, though this was really only done to rule stuff out, and the doctor fully expects that the results will all be normal.  I think his blood test results have come in, but the doctor’s been away so we have an appointment coming up soon to go over everything.

The boys’ daycare was closed on Friday and today, and it’s been fun to spend time with them since I haven’t really been able to lately.  Jakob has been a total clown.  On Saturday I was working on the crochet thing while we were hanging out at my parents’ place, and Jakob came running up with a Hot Wheels car held above his upper lip.  “Look Mom,” he said, “I have a mustache!”  I asked if he’d like me to make him a mustache that he could wear, instead, and his eyes were shining, he was so excited!  I had some black acrylic with me and quickly whipped up this little number that he wore for about the next hour: 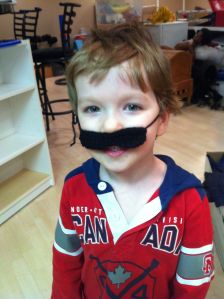 Have  you seen much of Yannick or Henri lately?  No?  Let’s fix that: 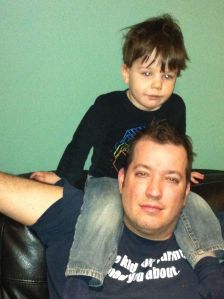 The sitting and laying around time this week, without being coupled with studying, allowed me to get a bit of stuff done.  In addition to finishing the crochet project, I also finished the Spring, Take Two socks (the ones with Zaubby and the black Sisu).  I’ve also been working on a special design, timed just for this time of year.  The weekend after the hernia popped out, I finally managed to finish the prototype for a new pattern.  I’ve mentioned it here before…remember all the talk of finding the perfect red?  Well my prototype needed a bit of work, so I altered the pattern and Maaike knit up a sample for me.  I’ve got it back now and am just doing the finishing before I can get the pattern finalized.  It should be available this week, and just in time too! 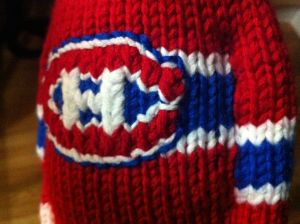