Size:  With this blanket you start at *k1, yo, rep around and keep adding (k2, yo, rep, then k3, yo, rep, etc).  I kept going until I had (I believe) 47 sts between YOs, which would be 480 sts on the needles.  I didn’t want a huge blanket for the crib, I wanted something I could wrap the baby in or tuck over the stroller without having too much excess.  I keep forgetting to measure it, though, to know how wide it actually is.  (I also haven’t blocked it, and don’t plan on it). 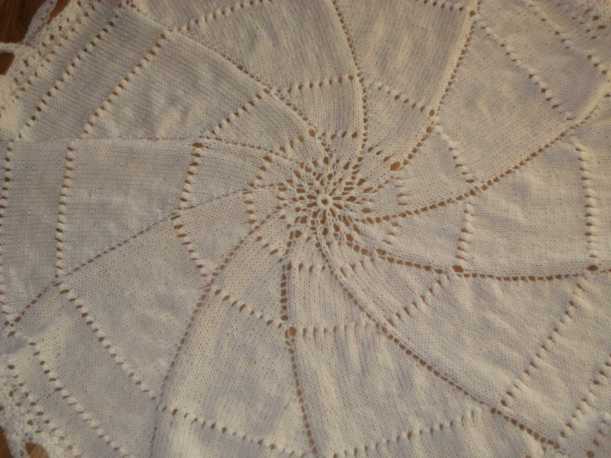 Yarn:  Bernat Softee Baby in White, 1 ball.  I ran out of yarn at the last eyelet row before the border, so while you can’t actually tell, the last 2 rows and the border itself are all knit with the same yarn in the White Sparkle colorway (white with a silver thread wrapped around it). 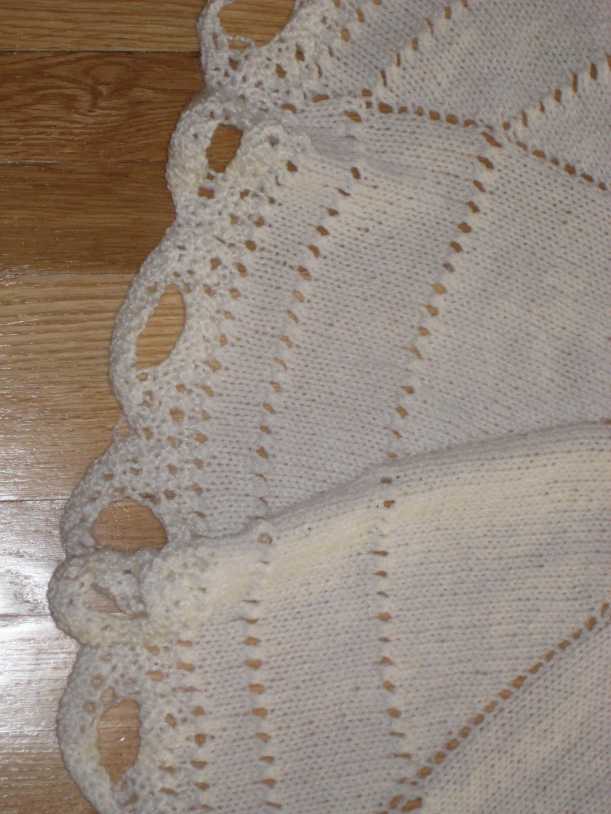 First I added the eyelet roundss.  After seeing Tara’s Pinwheel Blanket I remembered how badly I’d wanted to knit one, and I decided to knit one for the new baby.  I couldn’t knit it plain, however, as I’d knit Jakob a Debbie Bliss Alphabet Blanket (Rav link) and I wanted to have something that looked at least somewhat as impressive as all those eyelet letters.  I decided on the eyelet rounds and at first I had planned on putting them in on every doubled row.  So, for example, when it was time for an eyelet row, instead of working the pattern row, then one row plain, I worked the pattern row, then one row of *k2tog, yo, rep across.  Then I jumped back into the pattern on the next row.  The doubled row theory had me placing them in the plain rounds after the “k2, yo” row, then the “k4, yo” row, then the “k8, yo” row, and so on.  However, I quickly realized that once I got to “k16, yo” my next doubled row would be “k32, yo” and that would leave a large expanse of stockinette stitch without any eyelets.  Also, I didn’t plan on knitting enough more rounds to be able to go on to “k64, yo” or further.  I decided to work backwards instead, and after completing the “k16, yo” row, I worked until 8 more rounds had been done, threw in the eyelets, then did 4 more rounds, then the eyelets, then 2 more, then the last row of eyelets before the border.  I’d already calculated how wide I wanted the blanket, and thus how many sts I would have, so I was able to plan it out that accurately.

My other modification was for the border.  I knew from the beginning that I’d wanted something that went with the circles and spiral and eyelets, without being too severe (like a garter or moss band, much as I like those) or too fussy (like a sudden lace triangular border, or something).  I knew I had to have seen something like what I was looking for, and sure enough I even had it in my stash- Lucy Neatby’s Faroese Flower Shawl pattern (Rav link).  The border was fun and easy to adapt to this blanket, and gave me the exact look I was going for, plus is something fun for baby to stick its fingers through later.

Oh, and even though this was knit, instead of CO 10 sts and going from there, and tightening the center later, I used the Magic Adjustable Ring technique from Crochet Me and got a perfect, round center start.

Notes:  I’m really, really pleased with how this project turned out.  It was a fun chance to “spruce up” an existing pattern with my own ideas and I’m really happy with the end result.

I finally got around to taking some progress photos last night. It was really late so forgive the flash…but feel free to admire my new couches as the background! 🙂

This is the progress on the BullsEye Pinwheel Baby Blanket I’ve been carrying around as my “work anywhere” knitting. It doesn’t look like much right now, but will hopefully look good once the bind off frees it from the confines of the circ I’m working on.

I’m at row 38 and have calculated that I want to be at row 47 and either bind off, or work an edging, so the end is in sight!

Also, this weekend Maaike and I started knitting(along) Baby Surprise Jackets. Here’s the progress on mine as I went to bed last night.

Here is how it will look when properly folded and seamed. I’ve decided that I will make the buttonholes on both sides as per the pattern, and will wait until our baby is born to choose buttons. The blue and green is pretty unisex in my opinion, but if we have a girl I think I’d like to put little flowers or something to push it over the girly edge.

2 years ago, today, Yannick and I got married. Happy 2nd anniversary, my love!

And perhaps even more special than that, today also happens to be Yannick’s birthday.

(Yes, chosen so he wouldn’t forget the date).

I’ve been a little knitting restless lately, because I’m knitting for hire but occassionally I get stretches of time where I’m waiting for an instruction so I need something else to work on while I wait. I’m not going to randomly cast on for a sock or something and have ANOTHER unfinished object lying around. I have a few projects I’d like to start, but Maaike and I agreed we’d do mini “KAL”s for them, and so I need to wait for her to be ready, plus since I have Veronik’s knitting as a priority, I really need something I can pick up or put down without any guilt that someone is waiting for me to catch up.

Then Tara goes and mentions the Pinwheel Blanket she’s been working on. Which reminded me how long I’ve wanted to knit one. And how I have a perfect excuse. Plus how it is mindless and pretty-much patternless, which means I can pick it up and put it down whenever I want without making notes in a chart, or taking a note of my row count.

So I blame Tara for the fact that I am about to go stash diving for suitable yarn while I await an instruction clarification. I had no intent of casting on anything new, I swear.