I can’t take it any more- I called the doctor.  It’s time to go in, whatever I’ve got isn’t going away any time soon and I can’t take all this coughing.  My hernia(s) popped out today…though at least there’s good news there ‘cus it was no different from usual, so now I’m not paranoid any more about it hurting worse when it pops out…it must have just been something getting caught last time.  The bad news is that my doctor can’t see me until tomorrow morning, so I have to endure another day like this.  😦

Had some cuteness with the boys before they went to bed.  I’m trying to get my Jan/Feb socks done and was knitting while they were playing before bed, and they both wanted to play with my yarn ball.  I went down to my office and got them each their own little yarn ball (leftovers of Nordique from the guild’s swatching challenge) and took these pics of them.

They spent at least 15 minutes unrolling and re-rolling the yarn balls until it was bed time.  It was too cute! 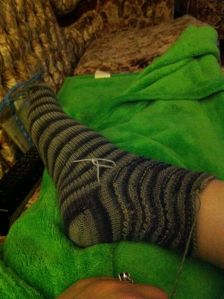 This is where I’ve gotten to on the socks so far.  I just finished the first sock.  I got bored with the plain stockinette, and for the longest time I’ve wanted a feather & fan pair of socks, so I decided to wing it with these.  I did a 20-stitch repeat, and these are 60 st socks, so I only have 3 “waves” going around.  I’d like to rework it next time and have more waves so the socks come out more feminine…maybe on my next pair.  (The tie in the middle is marking the first row after working the heel, so I can count and make sure the 2nd sock has the same number of rows).