When I’m determined something will work a certain way, I have this overwhelming need to get it done.  I looked at the elephant pattern and I KNEW it could be knit in the round, it would just take some understanding of the construction.

Confident that I had overcome the foolish mistakes I’d talked about last post, I sat down and got to work.  I even put in 2 stitch markers; an orange one (for stop) to show me the end of the round, signify the tail end of the elephant, and be a location for the increases, and a green one (for go) to show me the face end of the elephant and remind me to just keep on working past the marker so I’d have nice, unbroken garter ridges.  It worked perfectly. 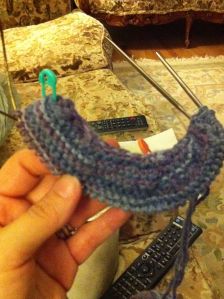 It worked so well that I got into a rhythm of knitting while watching tv, only occasionally stopping to glance at the chart just to see if the next round had the increases twice or five times.  I got about 6 ridges past what you see above when I stopped, and stared at my knitting in disbelief.

I’d gotten so caught up in my own cleverness that I’d forgotten the most basic rule, the fundamental core of following a written pattern: READ the pattern.

I couldn’t figure out why the front of the elephant was curving so nicely but the back was flaring so much.  Well DUH- any glance at the INSTRUCTIONS would show the answer to that.  The increases weren’t ALL on the tail end.  The rows with 5 incs/row had them at the tail end- but all the rows with 1 or 2 incs per row had them at the head, so the body would grow towards the head too!

Is this what they mean when they say someone was hoisted upon their own petard?  It feels apropos.

After realizing what I’d done, I caved.  I symbolically speared a Kleenex with my knitting needle and waved a white flag.  Enough.  I give.

I will knit the damn thing flat, and seam it, smiling the whole time.

So I started again.*

Since I was already starting over I gave the whole thing a critical eye and thought I`d like it to be bigger.  I could kind of estimate the final dimensions based on what I`d already knit, and I really wanted the elephant to be larger, more like the size of the baby, instead of a small toy.  So this time I cast on with the yarn held doubled.  I had 2 full balls of the Red Heart Misty left over after knitting Esther`s Slippers and I thought it would be enough…

I got about 5 ridges past this point when I started to worry about not having enough yarn.  I only had the 2 balls, and it was from many years ago, so it`s not like I could get more.  Plus I was still knitting the elephant on 3.75mm needles so I`d get a dense (read: stuffing-proof) fabric, and we all know how much garter stitch likes to eat yarn.  After going to all this trouble I`d really hate to have both sides of the body done and run out of yarn halfway through the underbody, or whatever, so I had no choice but to start over, AGAIN. 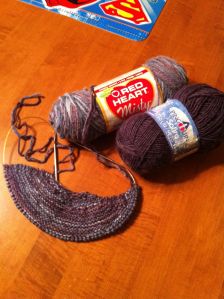 This time I`m pairing the Misty with some Pingouin Safira (that Robyn gave me at guild a few months ago, thanks Robyn!).  The colors work well together, and I think the overall heather-y mix of purples is still boyish, but soft enough for a baby.  The fabric I`m getting is dense and squishy, but even if I stretch it I can`t quite see through it, so I know it will hold up to a good stuffing.  And yes, Maaike, since I`m knitting it flat, it will regain the structural integrity of the seams to help it keep its shape.  😛

I`m hoping to have the elephant done before my surgery (not next Monday, but the one after) because I will be off work and unable to drive for a bit afterward and I would like to give it to the new mom myself.  Plus it would be nice to have one less obligation over my head while I`m home, especially since if this one is anything like last time, the first week will pass in a haze of pain meds and sleep, only this time I still have school work to do.  I`ve got about 2-3 hours of studying to do each night to stay on track, but I think in 2 weeks I can still manage to knit a garter stitch elephant.  I may not get much sleep…but hey- I`ll have plenty of time to sleep soon, right?

*I DO still insist that it CAN be knit flat, and if it comes out cute enough to make another one, I will probably attempt it.  Probably.  But either way, I KNOW it can be done.  Really.  It can.  Uh huh.

4 thoughts on “i’m stubborn all right”