Who knew – that 105.3 F fever in an 18 month old isn’t a big deal?  Not me, that’s for sure.  The fever and yellow eye gunk (we’d already had the Green Boogers of Doom, and now we have the Yellow Shmutz of Suffering) led to Jakob staying home from daycare on Wednesday.  He came to work with me in the morning and slept in my arms for 2 hours until my mom came to get him at lunch time.  His fever was still rising so she brought him to the doctor for me, and they said he had an eye infection and prescribed antibiotic drops.  They also warned that it could lead to an ear infection, so if he still had fever in 48 hrs we should bring him back so they could check his ears.  Ok. I can handle that.  He’s not eating, and when we put him to bed that night he was burning up, so I took his temperature again.  104.5.

At midnight he woke up crying and when I went to soothe him I almost burned myself on his skin.  105.3.  I’ve never seen the thermometer go that high!  When it hit 105 I started crying, then shaking as it rose higher.  Jakob was nearly comatose; instead of crying and pushing to get away from the thermometer he just…lay there…like he wasn’t fully present.  My mind started flashing- what are we taught about fevers while growning up?  High fever=bad, cool baths, brain inflamation, seizures, warning, danger!  I immediately called the Children’s Hospital emergency room and asked who I could speak to to find out if I should bring him in.  They said to call 811 (the InfoSante hotline).  Anyone physically there that I could speak to?  No, call 811.  Fine.  I call 811.

InfoSante can’t get me off the phone fast enough, warning danger DANGER go to the hospital, do not pass go, he could go into convulsions, he needs to be rehydrated, why am I still on the phone?  So we go to the hospital.  After a 4 hour wait we get lectured for bringing in a child who doesn’t need to be seen.  “Never call InfoSante,” they say, “They’re alarmists and will tell you to come to the hospital for anything.”  “You told me to call them.”  “Well, it’s ‘cus we can’t give info over the phone.”  So basically I’m damned if I do, and damned if I don’t.  I also don’t consider a rediculously high fever “nothing”, but apparently that’s just me.

To recap the rest of the Jakob saga…yesterday I kept him home with me.  In the morning his temperature was only 100 F and I thought maybe it had broken.  He still was barely eating.  At bedtime the temp was up to 103.4 F.  At midnight I snuck in and gave him another dose of Tempra.  This morning it was 104.5 F at 6:45 am and I noticed welts all over his legs.  So I booked him an appointment with his doctor (as they’d asked) and cancelled the appointment he was supposed to have at a photo studio at noon.  I had my 32 week ultrasound this morning so I couldn’t stay with him, so Yannick brought him to my mom and she’s been watching him all day.  She also took him to the doctor for me.  He still has fluid in his ears but not enough to warrant meds yet, and the welts will probably spread over his whole body before leaving, as they are a side-effect of the fever.  Again, if there is still fever in 48 hours we should go back, but we have his 18 month checkup on Monday anyways, so I will just wait until then.  So in the end there’s nothing seriously wrong, but the poor little guy is sick and looks so pitiful just lying there.  The snuggle time is great if you can stand the heat coming off of him.  Luckily he’s drinking just enough to keep from becoming dehydrated.

Who knew – that there would be enough time during Jakob’s nap on Thursday to finish the first Queen of Cups sock?  (Ok, I had a feeling about this one).  I didn’t weave in any ends because if the final verdict is “good fit, slightly too long” I want to be able to change it without too many headaches.

Please ignore my homebrew sock blocker- I didn’t have any pliers handy and my bare hands couldn’t smooth the hanger the way I wanted it to go.  It is clearly not “blocking” the sock, but hopefully making it look more attractive than just lying on the table.

Here are the first each Queen of Cups and Boring Brown sock.  Neither is my size, so please ignore the fit (and the cat hair).  My inlaws should be back next weekend to help Yannick watch Jakob while my mom, sister and I spend a 4 day weekend in New York City, so I will get them to try them on (blindfolded) and let me know if the sizes are good. 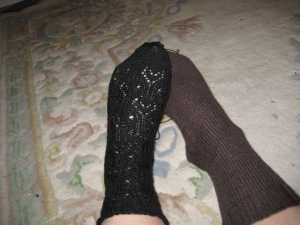 I was feeling kinda crappy last night so I skipped prenatal aquafitness and instead started the first of 3 Christmas gifts for Jakob’s daycare teachers.  The yarn is Dream in Color Smooshy, in Cool Fire, and the pattern is the Flower Scarf (Ravelry link, non-Ravelry link).  I’m going to have a ton of leftover yarn, which means I can most probably eke a pair of short toe-up socks from the remnants.  Yay! 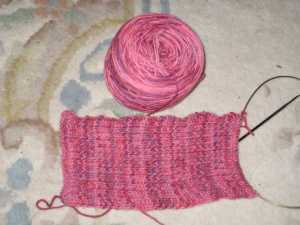 One last “who knew” – who knew that this stitch pattern is NOT ribbing?? 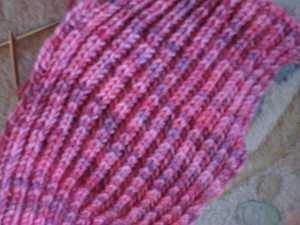 It’s garter stitch!  How awesome is that?  The pattern is written as Fisherman’s Rib which is based on 1×1 rib.  But below that the designer offered a garter adaptation that was supposed to look nearly identical.  I really didn’t feel like working ribbing so I tried the garter version – holy crap it IS nearly identical!  I spend almost as much time knitting it as I do stopping to look at the resulting fabric and trying to identify how it does what it does.  Tres cool.  It’s a nice, cushy, thick, stretchy faux-rib, and I think I’d like to try it on a garment edge one day.