Thank God for antibiotics!  It’s been a few days, but I’m finally feeling better.  It really hit me hard this time, with full muscle pain around my neck, and no appetite (I think from both the pain and a side effect of the antibiotic or pain killer) so 24/7 headaches with one really bad migraine the other night.  Now I’m almost fine.  Still finishing the run of meds, and taking a pain killer before bed.  They are too strong to take during the day when I have to drive or be responsible for the boys, but between the hernia, a possible one starting on the opposite side, the lingering neck muscle/gland pains and the headaches…at least they let me sleep.

I was a little confused (let’s blame it on the meds) and thought that guild is next Tuesday, when in reality it is the 2nd Tues of the month…which means the week after.  Somehow I’d convinced myself that it was the Tuesday in the 2nd week since the month starts- not the same thing.  (Thanks Maaike!)  Anyhoo…thinking it was close to guild reminded me that I’d promised to do another quilt squre for our latest charity blanket project.  Wanting to get it out of the way, I cast on April 1st and did all the knitting and about 2 letters in duplicate stitch.  I finished the rest the next day.

Yarn:  donated scraps of Patons Decor in Red and White

Modifications:  I fixed up the chart that was given to me, and worked the lettering in duplicate stitch rather than intarsia. 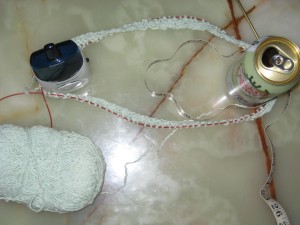 I’m trying to clear off everything outstanding on my plate.  I know- it’s futile as more stuff will land there before it’s clear…kinda like at some strange buffet.  But I keep trying to keep up.  One of my most pressing deadlines is a baby gift for my friend Amanda.  She’s going to have the baby any day now, and I’m not prepared.  I finally decided what to knit and cast on Friday with stash yarn but…as you can see above…it didn’t work out.  The soda can and monitor are there for scale- that is the cast on and 5 rows of the circumference for the body.  It’s supposed to be size 0-6 months.  This is what I got after ripping out the hugeness I got when I cast on for the 6-12 month sweater size.  For contrast, if you gave a little tug to straighten out the measuring tape you see inside there, THAT is how big this size is supposed to be.  I’m just glad I listened to my gut and ripped it now after only wasting the last little while!

Finally, now that at least some of the backlogged photos are caught up, here are some recent photos of my precious boys.  Since I was feeling up to it, and the weather was so gorgeous, I took them to the park Thursday. 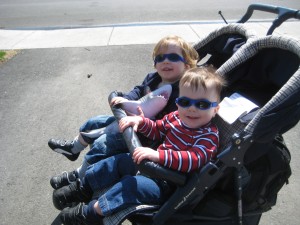 Here’s Jakob enjoying some craft time the other night after dinner.  He was having so much fun he wouldn’t even leave the table with the offer of some TV before bed!

And here’s Henri from 3 days ago.  I swear I could just eat them up.