Today was uneventful.  I didn’t get much weaving done, just a few rows while the kids played this morning.  I did some swatching for a new pattern, but it’s still in the early drafting stages, and I’m playing around with it in Excel until I get it right.

Since I’ve got nothing else to show you, here’s my aunt’s scarf all finished up. 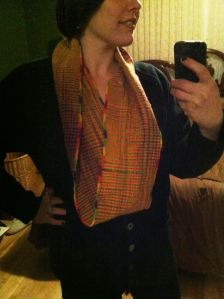 I mailed it to her as a surprise, and she was supposed to receive it last Monday, which is why I haven’t been posting finished pics (even though I don’t think she knows about, or reads my blog).  I’ve come to find out that she’s out of town, and didn’t actually receive it yet.  Oh well- here it is.

It’s an infinity scarf with a twist, and can be worn straight or wrapped twice around the neck. 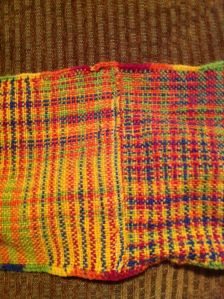 This shows the seam.  You can barely see it because it was done by machine, and it really doesn’t have much bulk at all. 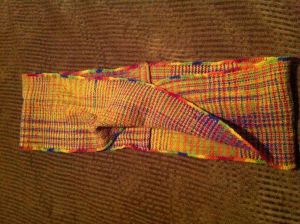 It’s hard to photograph something with a twist- you don’t know how to lay it down! 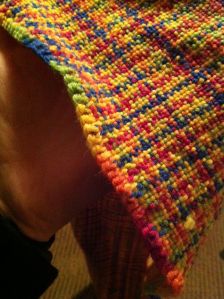 This shows the crochet edging, and how tight the fabric ended up after it was washed and dried.

Today ended a bit depressingly.  I was starting to feel a bit better, and looking forwards to getting back to work next week.  Kind of my own Spring renewal.  And then…before bed I noticed the boys were acting a big sluggish.  I’d thought Henri felt a bit warm last night but since he was staying home today I didn’t take his temperature.  I took it tonight- 102.  😦  Then I took Jakob’s, because a sign that he’s sick is when he’s extremely cuddly and affectionate, and he’d been coming up to me and stroking my cheek before giving me a little kiss all afternoon- 100.8.  😦  Looks like I might not be back at work so soon…