I’ll be playing with these guys:

I swear there’s nothing more cute than watching my boys interact.  They’re so close!  The other night we let Henri try to sleep in Jakob’s bed – I say “try” ‘cus normally Henri’s asleep by 7:30, so when by 8:30 Jakob’s chatting was still keeping him up and we could hear him through the monitor saying “I’m sleepy…”, we took him out and back to his room.  But, before taking him out, we were cracking up listening to the two of them hug and kiss and say “I love you Henri”…”I love you too Jakob”…”Give me another hug!”…”Did you say I love you?”…”Yes”…”Ok, I love you too!” 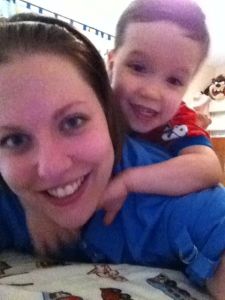 I’m going to try to post while struggling through the next month.  It’s going to be insane!

First we’ve got our last online test due by July 9.  Then our final exam is August 9.  As if it weren’t enough to study for that, I just found out that next year’s program only has a September start- not a January start like we’ve been doing.  Which means that all of our practicums (ie: lots of paperwork) which are normally only due by Nov 1 (and as such, aren’t done yet!) are all due by the final exam.  Yikes!  We’ve got just over a month to do all our written work for the year, and study for the final, and then no break afterwards ‘cus the following year will be starting in early September.

AND I’ve got that knitting magazine deadline of September 1st!  Crazypants!

I know it will all get done…somehow…I just really can’t wait to be on the OTHER side of August. 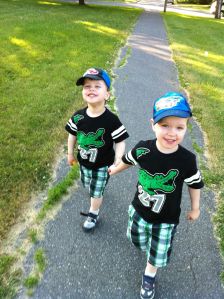 I will continue to dress these guys alike as long as my mom continues to buy them matching outfits.  It’s nuts- they’re the same size. 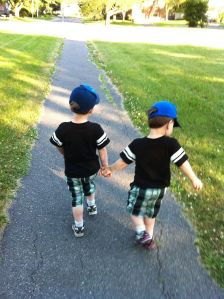 Unrelated, some sad news.  Remember when I talked about having to pick up/chauffeur my parents’ dog Nikki back in Jan or Feb?  She never really recovered from whatever was ailing her, had dropped down to 5-6 lbs and over the last few days couldn’t even be coaxed into eating people food or treats.

We went over on Sunday and the boys played with her and told her they love her and gave her kisses, and I got some cute pics of them holding her.  By Monday my mom was force-feeding her water, just to try and hydrate her.  On Tuesday she was brought to our cousin, the vet, and she never made it home.

Rest in peace, Nikki.  You were a silly and crazy dog who only wanted to be cuddled and held and rocked like a baby, and you gave us a great 13 years.  XOXOXOX