Yannick and I alternate mornings and since he gets a late sleep-in on Saturdays (the store opens later that day), I get the late sleep-in on Mondays (our day off), and he takes the boys to daycare.  Neither of us sleep in on Sunday ‘cus we take the kids to swimming lessons early in the morning.  I woke up this morning to a “homemade” Valentine’s Day card from my hubby: 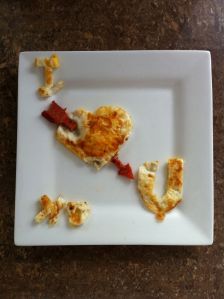 I’ll admit this breakfast left me with 3 distinct thoughts:

2. Wow, he has touched every square inch of my food with his fingers.  Yum!

(Completely unrelated to anything except that I’m typing this with Much Music on in the background:  I just can’t get through the music video for Pink’s latest song (F*n Perfect) without crying!  This time I managed to hold out to the end, but those tears still sprang up when the girl mouths the words to her daughter.)

I forgot there was a little knitting done last week.  Early in the week I’d swatched to see what border treatment I’d want to do.  The pattern calls for 1×1 rib, but I was afraid it would pull in and look “sweatshirty”, and Maaike suggested maybe a moss stitch border would be nice.  I swatched both, and decided that while I love the look of moss stitch, it was too heavy for such a light, airy top.  The 1×1 rib, because it was worked on the same number of sts and with the same size needles, barely pulled in and gave exactly the look I wanted.  (In other words, the designer was right, LOL). 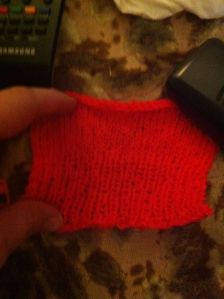 There’s been a lack of delicious on the blog lately, so here’s some more sweets for Valentine’s Day: 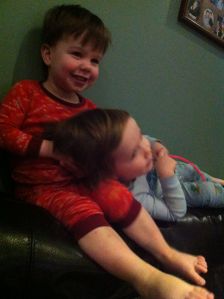 3 thoughts on “a sweet way to start the day”