It’s always the same…I fantasize about all the stuff I’ll get done on the weekend…the projects finished, the extra time for little luxuries, etc. And then the reality is never the same. This weekend was no different, though I knew going in that it would be a little hectic.

Saturday I had to finish gift shopping for a family Hanukkah/birthday exchange on Sunday. I wrapped gifts while the boys napped then spent way too long (the rest of their nap time) choosing a project to cast on for an event that night. I was going to see a performance of The Nutcracker with Maaike as her daughter was in it, and I pictured a few hours of mindless knitting time. I couldn’t work on my KP project because I need to make notes and see my work, and I’d finished my last stockinette stitch on-the-go sock. I was going to cast on for a sock but I knew I wouldn’t have time to get through the short-row toe before leaving and I wouldn’t be able to pick up the other half of the sts in the dark. In the end I went with the Featherweight Cardigan in some thin crepe-y yarn from stash (photos to come).

I needn’t have bothered- the show was too engrossing to knit beyond the wait at the beginning and intermission. It was the Ballet Ouest performance at Centre Pierre Peladeau and it was wonderful.

Today I finished getting the gifts and diaper bag ready while Yannick took Jakob to swimming. (I had to keep Henri home so we could get a credit for next session…don’t ask). Then we all went to my patent’s house for a LONG game of “guess which present is yours”. We put the boys down for their naps there so it would be easier on us, because the birthday party we had that after noon was closer to my patent’s house and started in the middle of nap time.

We woke the kids early for the party and had fun playing with friends we don’t see very often. Out of everyone there, though, my boys preferred playing with each other and kept calling for one another, which was really cute.

(I don’t know why Jakob was pulling his shirt down). 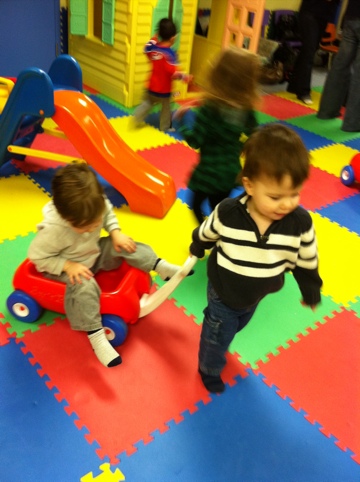 …but Henri pulled Jakob with only one. 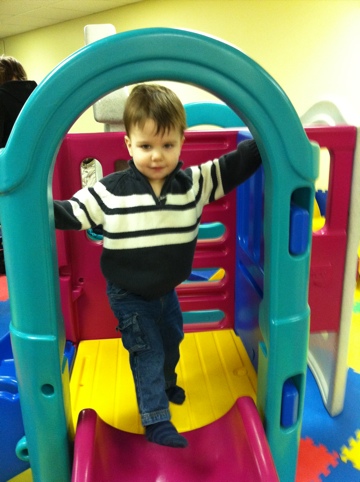 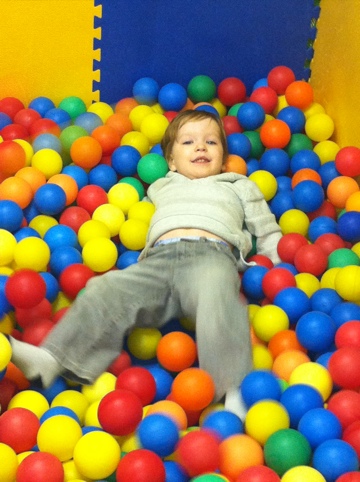 I hope you all had a great weekend, and Mazal Tov to my cousin Robyn on getting home with her new baby Quentin!