By five months, your baby…

– pay attention to an object as small as a raisin – CHECK

– reach for an object – CHECK – and it ends up in his mouth!

– smile back when you smile – CHECK – non stop!

– grasp a rattle held to backs or tips of fingers – CHECK

– keep head level with body when pulled to sitting – CHECK 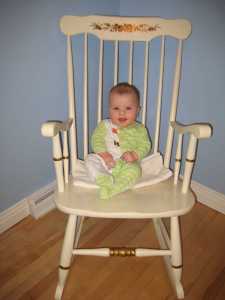 – roll over (one way) – CHECK – he can roll from  his back to his stomach, since he was about 3 months old

– turn in the direction of a voice – CHECK

– pull up to standing position from sitting – kinda.  When he’s sitting in my lap facing me, he pushes up with his legs to make himself stand.  That’s different from pulling up, though

– object if you try to take a toy away – CHECK if you count holding tighter to keep it.  Neither he nor Jakob ever objected negatively to having something taken away.  (Well, Jakob does NOW, but never when younger)

– babble, combining vowels and consonants such as ga-ga-ga, ba-ba-ba, ma-ma-ma, da-da-da – CHECK for babbling, but never a consistant set of consonants 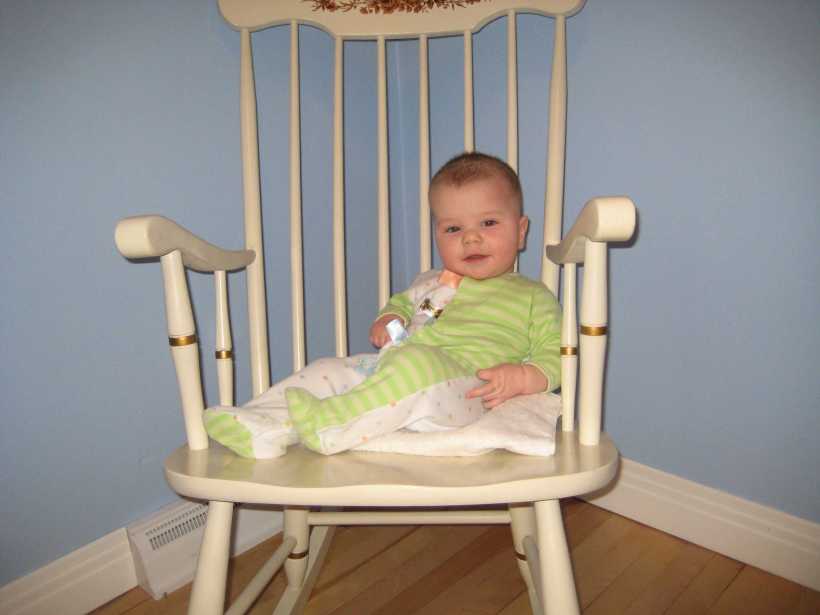 Henri at 5 months is getting better, but still frustrating.  I really need to go back and check Jakob’s progress to see if I’m expecting too much out of Henri.  He is still not napping consistantly (same time each day) and his nights aren’t perfect.  He always goes to bed at 7 and wakes at 7 the next day, but 3 nights of the week maybe he’ll need a top off feed at 8:30, but then sleep straight to 1am, then after feeding sleep right to 7am.  Other nights he’ll sleep from 7:30pm until 12:00am, feed, then wake again at 3am, then maybe again at 5 or 6, or maybe he’ll go right through until  7.  If he wakes after a few hours of sleep then I nurse him back to sleep and he’s out cold right away.  He doesn’t wake up and stay up.  If he’s just fed within an hour or two then I try to rock him back to bed without feeding.  It might take up to 20 minutes, but I’m usually successful.

His personality is still wonderful.  For everything that he’s going through (teeth, ezcema, a non-stop growth spurt- I imagine growing does cause pain) he is such a smiley, happy little boy.  He only cries when something is wrong, and if he is crabby and won’t sleep, or wakes after 10 minutes, if I leave him in bed he’ll cry.  If I take him out he instantly brings out the smile and the charm.  He’s a flirt and loves attention.  He has no problem being pawed over by other babies since Jakob grabs at him whenever possible and he loves it.

We’re still working on his ezcema, but his 4th (!!!!) tooth has cut through and hopefully once the other 2 that are swollen come out that will relieve at least one of his discomforts.  He’s growing out of outfits faster than I can wash them, and already I’ve put away most of the stuff Jakob wore until 12 months or so, because either Henri is too big already, or it will fit now, but is a Fall/Winter outfit and I wouldn’t subject him to that in the summertime.