Where does the time go?  It’s strange to say this, being on maternity leave and all, but I swear I got more accomplished when I was working full time.  I actually look forwards to days when I have no plans and can just lounge around the house with Henri, and those days are surprisingly few and far between.  Mondays we have playgroup, Wednesdays we either go to the movies or to Ariadne, and the other says just seem to fill up with doctors appointments, other appointments (I got a pedicure done this past Thursday, woo hoo!), grocery shopping or who knows what.

Mommy with Henri at 12 weeks old.

(thanks for taking this photo, Maaike!)

Here’s a typical day in my life:  Last week I swear that there was a day that at 9:00am I sat down on the couch to nurse Henri, and put my knitting bag beside me.  I told myself “today I’m going to take time for me, and when Henri’s sleeping I will knit, and drink tea, and watch my shows, and relax”.  And Henri drank.  And when he was done I put him on his play mat, and went to make my tea.  Then he started to fuss to indicate that he was tired.  So I put him in bed.  Then my water was ready, but Yannick had left his breakfast dishes on the counter instead of putting them in the dishwasher because it was still full.  I have this thing about a messy kitchen- I hate it.  I always have the kitchen cleaned up before dinner is on the table so there is nothing hanging over my head.  So I emptied the dishwasher.  Then I made my tea.  Then I realized that if I didn’t eat breakfast it would be too late and too close to lunch, so I made breakfast.  Then Henri fussed, so I went up and rocked him.  Then I came down and ate my breakfast.  Then I remembered that we were going out that night and probably would come home somewhere after 8pm, so I would be smart to set the DVR now since I’d miss the beginning of my shows otherwise.  Then Henri woke up.  Then I played with him for a bit, then fed him again.  This time he nursed himself to sleep.  I put him in bed and knew that I’d have to shower to be presentable to go out, so I grabbed the monitor and phone and went to take a quick shower.  Then it was lunch time, so I made a lunch for myself.  I remembered I had 2 places to call that would probably put me on hold but I didn’t want to have to call during my shows so I figured I’d call them, get them out of the way, then I could have my lunch, then veg and knit.  Of course, by the time I finished on the calls, ran down to check my email, had my lunch and sat down on the couch Henri fussed.  I rocked him back to sleep again (he takes a longer afternoon nap) then realized I should get dressed while he slept because I’d have to pick up Jakob early and if Henri slept a little late then I fed him before leaving, I would be cutting it close later.  So I got dressed.  Then I was smart and packed our diaper bag and a bag for Jakob for the evening (sippy cup, fork, bib, etc) so I wouldn’t have to do it later when we were running around last minute.  I got everything together and then Henri woke up.  I had just enough time to feed him before I had to leave to go pick up Jakob…and so on.  By the time both kids were in bed I saw my knitting bag still sitting on the couch and finally got a few rows in.

And yet Yannick gets home and sees that there was no laundry done, no vacuuming done, no sheets were changed but my knitting is longer than the previous day- so clearly I must have it easy, doing nothing all day but taking care of the baby and knitting.  Yeah right! 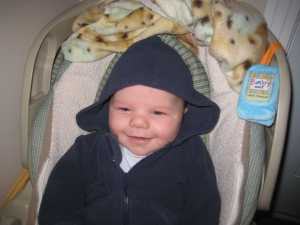 Here’s a photo of Henri at 3 months. 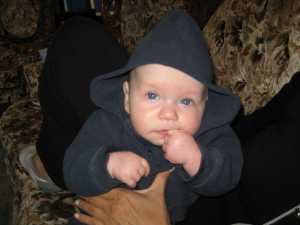 For fun, here’s a photo of Jakob in the same outfit, at 4.5 months old.

Last week Jakob’s school asked us to send in 2 hard boiled eggs and an egg carton so the kids could do Easter projects.  That gave me the idea to do one of our own.  I had a bunch of eggs that had no dates on them and I couldn’t remember when we’d bought them, so instead of eating them I commandeered them for a little painting project.  I used a sewing needle to punch holes at either end of the egg and tested my lung strength blowing each one out.  I repeated the blowing process with some water to clean them out fully, then let them dry for 2 days.

Once they were ready I let Jakob go to town on them.  He had never used his kiddy paints before, and he had a great time doing is “art” on one then handing it to me and asking for a new one. 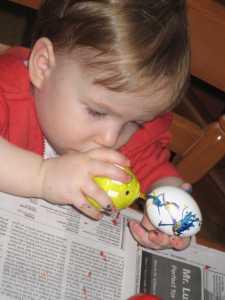 I didn’t help him at all other than to pass him blank eggs.  He did all the color choosing and paint applying himself.  It was adorable to watch him be so full of concentration as he worked!

When he was done I stood each egg up on tooth picks stuck into the side of an empty milk carton, and let them dry for 24 hours.  I “varnished” them with clear nail polish (all I had on hand) then signed each with “Jakob ’09”, waited an hour, then varnished over the signature.  Had I thought of it earlier I would have signed them BEFORE the initial varnish. 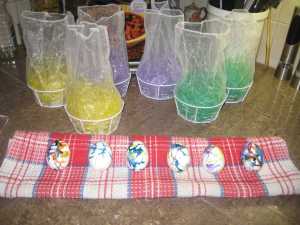 I had bought little baskets and Easter “fluff” at the dollar store, and once the varnish was good and dry I packaged up his eggs to give as gifts to his great-aunts and grandparents and great-grandmother.  I think you can click on the photo to see it larger- the eggs came out really nice!  They almost look like Chinese characters. 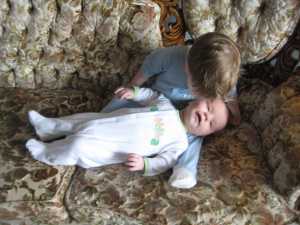 Here’s a random photo of Jakob and Henri together.  Every now and then Jakob wants to hold Henri, and they were both in good, calm moods so I let him have Henri in his lap.  He leaned down to kiss him so often that I was unable to get a photo of both of their faces!

On Tuesday the older classes from Jakob’s daycare went to the Cabane a Sucre (sugaring off).  The little kids (Jakob’s age) were allowed to go only if a parent went with.  I brought Henri to my mom, and spent the day with Jakob at the Sugar Shack.

He was quite excited to see the horses, but they were nothing compared to the thrill of jumping in the many, many puddles.  They kept us waiting outside in the FREEZING weather for over 30 minutes until they realized that the horses weren’t shoed properly to pull us with the buggy to the main building, so at that point we all walked the 20 feet to warmth.

Not bad for a self-portrait in the bathroom, huh?

Jakob had a great time listening to the music, dancing and running around with the older kids.  He was perfectly behaved and I was so glad to have had the chance to spend so much one-on-one time with him, since in the evenings he usually plays with Yannick while I take care of Henri.

I think his favorite part was “la tire”!  (When they pour the hot syrup on fresh snow and you wind it around a popsicle stick as it hardens).

I’ll leave you with this photo from later that night.  Jakob was playing with Henri on his playmat, and, being the good brother that he is, let Henri suck on his thumb.  It was quite funny!

3 thoughts on “week 12, easter eggs and sugaring off”