LAST Tuesday I got up bright and early to go for the abdominal ultrasound.  They pushed, poked and prodded me for about 45 minutes, going over every square inch of belly from my ribs down to my c-section.  I was glad they were thorough, but MAN it hurt!  They said my doc would get the results by Thursday, but that they didn’t see anything wrong.

Whew!  I made it home in one piece, popped a pain killer, and slept the rest of the day.

THIS Tuesday was less painful, and more productive.

In January I knit a hat for my aunt.

A few years ago my cousin was diagnosed with breast cancer, and when she underwent treatment and lost her hair, I knit her some hats.  (I forgot I also knit her a shawl to wear during chemo).

Well, not long after that, my aunt (same side of the family) was diagnosed.  I had planned on knitting her a hat, to start, but then she decided on a course of treatment that didn’t result in hair loss.  So I had planned on making her slippers…and then I started school and had less time…and in the end I forgot.

Her birthday rolled around again in January and my family was going to Toronto (where my aunt lives) and I decided to surprise her by sending down a hat.

It was a little short on me, but everyone’s head is different, and I wasn’t sure how it would fit her.

I told my mom to tell her that I still had about 1/3 of the ball of yarn, so if she wanted it longer, I could easily make it longer. 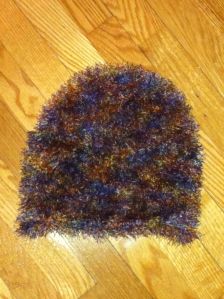 She wanted it longer. 🙂

This photo (above) shows the new length.  I had originally been planning on crocheting around the hat to add the length, but it is IMPOSSIBLE to find stitches in fun fur when crocheting.  I realized right away it would be much faster to slip my CO sts onto a circ and just knit around until almost out of yarn, then bind off.

That’s exactly what I did.  It added about 4.5″ more- you can (barely) see the orange stitch marker in between where my eyes would be (below), and I put that marker on my first new round last night. So everything from there down, is new. 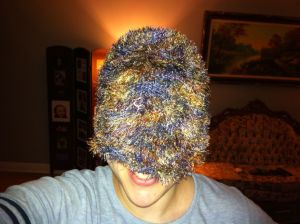 It’s obviously too long when worn pulled tight, but you can wear it with a bit of slouch in the back and the brim right above the eyes…

As usual you can find my finished (and unfinished!) projects in my “projects” page by clicking the tab up at the top of every page on my blog, and I also have this project in my Ravelry notebook here .

Why couldn’t I have decided to knit hats for everyone for Christmas?  Things would be going so much faster! 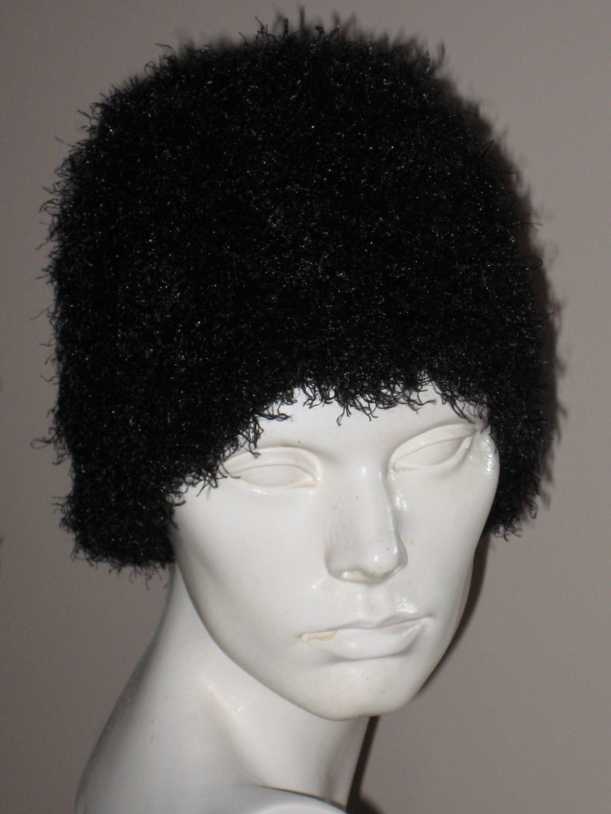 This was knit up for my cousin who underwent her first chemotherapy treatment yesterday and so had cut off her hair the day before.  I showed her an assortment of photos of “chemo caps” I’d found on Ravelry, and she picked out 3 that she liked.  Her mom (my aunt) went yarn shopping, and this is the first of the 3 that I made for her.