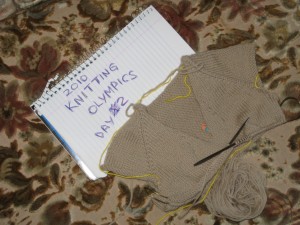 29.89% completed.  I feel like my training has paid off, and if I keep my focus on the goal, I might just make gold.

(p.s. did anyone else watch the women’s moguls?  Talk about a down-to-the-last-minute competition!  We almost had our first gold on Canadian soil too…) 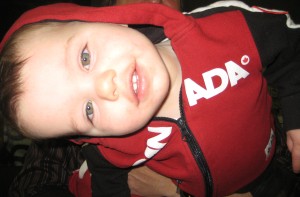 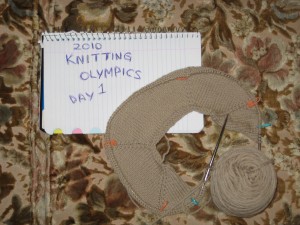 Here’s a photo I took Friday evening before the opening ceremonies.  My equipment was assembled and I was ready to go! 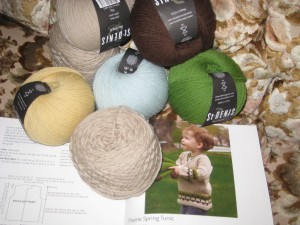 I’m going to be knitting Franklin Habit’s Prairie Spring Tunic from the premiere Fall/Winter 2009 issue of St-Denis.  I’m knitting it size 2, using the same colors as I needed it to be neutral- it is going to be a baby shower gift for my cousin’s wife.  They have a chinchilla as a pet (and used to have my chinchilla too) so I will be adapting the white blips in the Fair Isle section to be chinchillas.  If I have time I plan to knit a stuffed chinchilla toy as well.  It is an Olympic challenge for me partly because of my time constraints, and partly because to date I find my Fair Isle colorwork sucks.  I rock at intarsia, but I’m not comfortable with stranding the yarn without puckering or pulling.