One of Henri’s closest friends is a little boy named Matthew.  They used to see each other at the bus stop every morning, and then during recess/lunch at school, but at the beginning of this school year Matthew had to switch to a different elementary which falls within the French school board.  This means that the boys only get to see each other at playdates, which is sad for both of them.

Because of this, Henri’s been SUPER excited for Matthew’s birthday party, which was this afternoon.  The two of them love playing Pokemon together and trading cards, so for Matthew’s gift I picked up a new set of cards.  I showed it to Henri last night while he was coloring a card to go with it, and he said “too bad there’s no Eevee in the box.  Matthew’s FAVORITE Pokemon is Eevee.”

I nodded noncommittaly and handed him the markers.  Then he added, casually, “I sure wish you could have made him an Eevee for his party.”

Don’t get me wrong- I love making handmade gifts, and  I’ve often added little handmade touches to store-bought presents.  But… Matthew’s party was the next day.  And Henri mentioned this at 8:29pm.

Well.  I’m nothing if not optimistic!  (And a night owl).  I hopped into Ravelry, poked around at some options, and settled on this free pattern by Clare Heesh.  I assembled my materials,

made a quick post to my Instagram story about how crazy I was… and then got started.

I worked the pattern as written, with the following changes:

I was finished crocheting the body pieces by 12:43am: 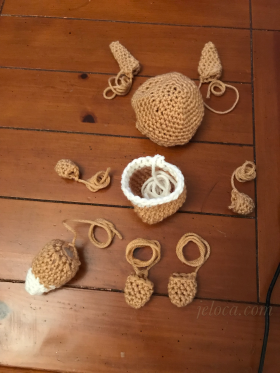 First I stuffed the body, then sewed on the legs.  After that I sewed on the tail, followed by the arms.  The next step was supposed to be to sew the head onto the body, but I found the stuffing kept wanting to pop out of the body, so I basted over it quickly with the tail of the white yarn.

I inserted safety eyes then sewed the head down, whipstitching at a 1-to-1 ration between the head and body pieces.  I stitched the ear centers down to the ears, then sewed those onto the head as well.  Finally was the fun part: the fluff!  I looped lengths of the white yarn around the neck then brushed it out with a cat brush until it was super soft and fluffy. 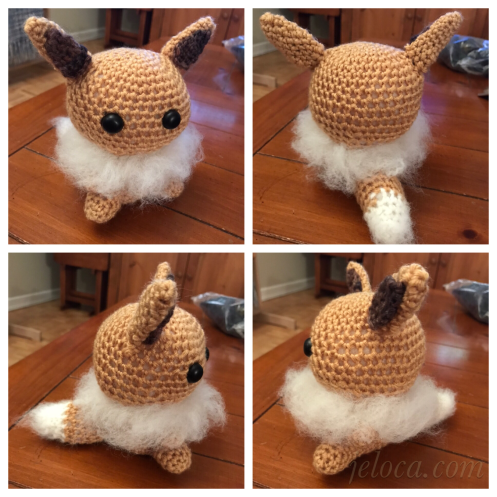 And here’s the finished Eevee!  I didn’t trim the fluff, instead I sort of folded it into place and used the end of my crochet hook to stab it into the body, similar to how you’d do needle felting.  The last thing I did was to use the cat brush and brush out the white end of the tail to give it a bit of fluff too.

I think she’s so adorable that I don’t mind that I only finished her at 2:15am LOL

UPDATE: I showed her to the boys this morning and they were beyond excited.  Henri squealed, and Jakob was so happy with her that he jumped off his bed to come hug me and say “great job Mom!” which MADE my morning and is EXACTLY the reason why I stay up til crazy hours doing things like this.