Tonight an old friend from high school came over.  I hadn’t seen her in at least 5 years, and it was great to catch up.  Because of her visit, I didn’t get to knit.  I did, however, get to witness the exploits of two very hyper, newly-minted superheroes. 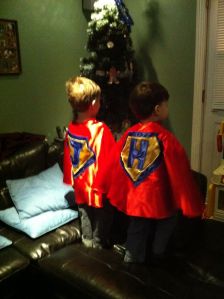 (Capes by Maaike, as a birthday gift for Henri and one for Jakob so he wouldn’t be jealous.  Secret Identities of “Jakob” and “Henri” by me).

Aren’t those capes awesome?!?  She made them herself, and they are absolutely everything a young superhero could ask for.  They originally had a lukewarm reception, as I’d expected since my boys are not good with change.  But a few days later suddenly the capes were all they could think about.  Seriously, you have no idea how hard it was to get this photo- every other pic I took was very much an “action shot”.

I found another project that I haven’t shared yet- Ribby Slipper Socks.  Back in October my aunt had surgery and I made her a pair of slippers to keep her feet warm and cozy while she’d be resting.

Let me say, this project has an obvious flaw- it looks UGLY off the foot.  Long and skinny and seemingly non-atomically correct.

But on the foot they’re transformed! 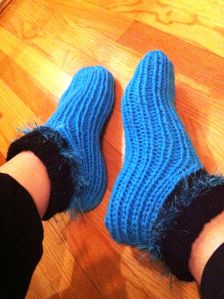 Cozy and form-fitting, warm and snuggly.  I think I want to make a pair for myself.

I used some no-name chunky yarn in the teal color, the stuff I’d recycled from the failed crochet deep v vest.  I still think it’s Bernat Softee Chunky.  The black is Bernat Pounder worsted yarn, and I carried along some teal LionBrand Fun Fur for the last 4 rows, then bound off in the black only.  I’d only had a small amount of the fur yarn, so I divided it in 2 and just did as many rows as I could in each sock.  I used 5mm for the foot, and 4mm for the cuff.  It’s a free pattern, I forget the source right now, but if you search for them on Ravelry you’ll find them.  (Something is making me think they’re a free Interweave pattern, but I won’t swear by that).

Before my next surgery (which will be in May, as it turns out), I plan on making myself a pair.  That way I can be cozy and squooshy too.  🙂

3 thoughts on “slippers and capes and friends from the past”