I didn’t think I’d been gone that long, though in truth for the last 2.5 months I’ve completely forgotten I even had a blog.

August: studying then final exam- I got the highest mark in the class, what WHAT! Knitting began in earnest for my magazine sample, slowed only by the need to write down everything I was doing.  It obviously wasn’t portable knitting, so a pair of socks was knit during wait times.  More doctor and hospital visits for Henri, including one with a specialist that I was hoping would give us answers, but instead just wasted our time.

September: more knitting for the mag, ‘cus a work-in-progress left unattended with young children led to a mishap that required a week’s extension on my deadline.  Once the knitting was done and the sample sent off I worked on writing up the pattern and grading the other sizes.  There was a brief respite for a long weekend spent at a lovely b&b in Woodstock (same place I’d gone with Maaike for Rhinebeck last year), this time done to celebrate my 5 year wedding anniversary, plus mine and Yannick’s early September birthdays.

And now…the pattern is sent (once I do some minor style corrections) and should be appearing in the Spring 2012 issue of the new online magazine called Clotheshorse, and my knitting nights are my own again.  All the old wips are still there, though there may be a few fos you guys haven’t seen yet, including one I whipped up mostly during the drive to- and from Woodstock for a friend’s newborn daughter.

I’m currently actively working on my sister-in-law’s 2nd pillow (my at-home project, ‘cus it requires designing and note-taking while I work), a pair of socks for Yannick with a random stash ball (my “on-the-go” knitting, ‘cus he’s worn through 2 of his knit pairs already), and a Linden for myself with handspun (not mine) pure wool sold to the knitting guild by a local woman, my project when I’m fed up with either of the other two.

One thing I’ve been keeping up with (unlike blogs…sorry) is nail polish.  In fact my trip to NY yielded little more than 20 bottles of random, not-available-in-Canada drug store sparkly polishes to add to my stash.  Yes, I’ve got a polish stash too.

I’m at work now and can’t share any knitting pics, but I can photograph my nails and share those! 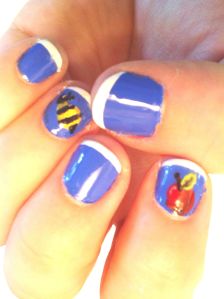 Today’s themed manicure is for the current Jewish holiday- Rosh Hashana- the Jewish new year.  The Israeli flag is white and blue, so I went with those as main colors, only I reversed them.  (The flag is mainly white with 2 blue stripes and a blue Star of David).  On this holiday we eat and serve slices of apple with honey pots for dipping, as a way of starting off the new year on a sweet note (to foretell a sweet new year).  So I used nail polish and a toothpick to paint a bumble bee (for the honey…though now that I type this I’m wondering if bumble bees are actually the honey producers…drat), and an apple.

I’m actually really proud of how the apple came out!  It started off as a cartoonish blob but a little playing around with the drops of polish on a Kleenex gave me some darker and lighter colors, and a few jabs of the toothpick later I had a shaded apple! 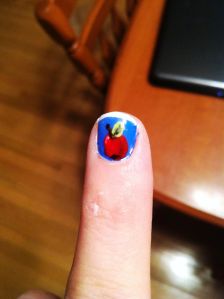 Happy New Year to those that celebrate, and a big “hi, and thanks” to those of you that stuck around even though my posting has been rather sporadic.

One thought on “happy new year”