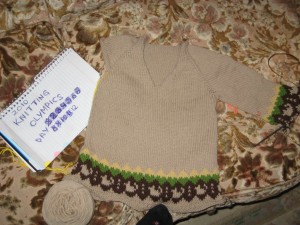 Here’s where I left off last night when I went to bed after watching Joannie Rochette’s short program place her in 3rd so far.  You can see that I’m almost finished the left sleeve.  The colorwork section is done, and there is about an inch or so of stockinette to go before the border.

(By the way, the border wants to flip a bit until I block it, so that’s my toe in all the photos helping to hold the bottom border down).

If you’ve ever seen the original Prairie Spring Tunic (and I hope you have, ‘cus Jakob is the really cute model!), then you can see the changes I’ve made.  First of all, although I bought the Chalk Blue color as called for in the pattern, I didn’t end up using it.  The blue is supposed to be the top 3 sts of the upside-down Oatmeal triangles, as well as the colorwork section inside the brown area.  Well, I needed the blue for a last-minute swatch redo for that submission I’d mentioned, and decided to just skip it altogether and stick with the Oatmeal throughout.  The sex of the baby is yet unknown anyways, so all I’ve done is to make a gender-neutral sweater even more unisex.

You can also see the design modification I made.  Look- chinchillas!  (Or, look- vague pixellated rodent shape!)  Many years ago, Yannick and I got a great deal on a chinchilla.  That sounds rather odd to type, but we kept going to look at them at Nature but they cost a few hundred dollars, then you need a cage that’s at least 3-4 feet high and wide for them to run around, plus apple sticks, and volcanic ash, and hay, and litter…let’s just say they’re not a cheap investment, although they do tend to live 20-30 years and can be quite affectionate.  On one of our visits to the pet store the mother of one of the employees mentioned that they had a chinchilla, 4 years old, and didn’t have the time to devote to her what with letting her run around for an hour a day for exercise, etc.  They’d give us the chinchilla, the cage and all her accessories and food- for $50.  So of course we jumped on the chance, even though we’d only been dating a few years and weren’t even living together.  Shastie, the chinchilla (as named by the prev owner), lived at Yannick’s place until we moved in together, then she came to live with us.  But after a while we realized that we weren’t giving her as much time as she deserved either.  Around the same time my cousin was moving out and wanted a pet, so we gave Shastie to him, and he renamed her Bubba.  Please don’t ask me why, I have NO idea.  Eventually his girlfriend moved in with him and a year or so ago they got Habsie, another chinchilla, to keep Bubba company.  They got married a year and a half ago and are having their first baby, and I decided to sneak chinchillas into their baby shower gift.

Unfortunately I got a phone call about a week ago telling me that Bubba had passed away.  By my estimation she was about 12 years old.  They’re keeping Habsie though, and might get another one someday too.  Hopefully they’ll be touched by the chinchilla reference, and when I knit the chinchilla doll to go with the sweater maybe I’ll put a little Canadians gear on it so it really will be “Habsie”.  🙂

Of course there’s always a little bump to impede my progress, and when I was working on the body I realized that the originally-6-stitch-repeat, which I altered to be a 12-stitch repeat, worked just fine with the stitch count for the 18 month size.  But when I’d realized that I had enough yarn to knit the 2 year size I’d switched.  And never adjusted my pattern.  And the new stitch count wasn’t divisible by 12.  Luckily I was only 6 stitches off, so in the last row before the colorwork I just increased 6 sts around and worked the rest slightly bigger.