Needles: 3 mm dpns for body, 2.5mm dpns for cuff (the smaller needles were necessary to get gauge)

Modifications:  (copied from my Ravelry page)  I had to slightly extend the cuff because the small length didn’t fit around my wrist. I also had to redo the first mitten 3 times (only from row 25 of the hand onwards) because the thumb hole was too tight for me.

My final mods are as follows:

To get rid of some of those extra sts before the end of the mitten, I placed a marker in the center of the 8 cast-on stitches over the thumb hole. On the last 2 chart rounds I worked as established until 3 sts before the marker, ssk, k2, k2tog, cont as established around. I also worked the decreases in the first round of ribbing. 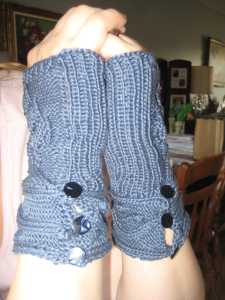 p.s. thanks for taking these photos Maaike!