As I mentioned in my last post, I’ve been completely addicted to the Princess Bride Coloring Book lately.  I’ve been using it as my reward for getting chores and stuff done, and currently have 5 pages in progress.

The title page is the first one I started with.  I confess I felt really dumb when, after staring at the page for a while trying to figure out what color I wanted to make the flowers, I had a flash of insight and did a quick Google search.  Sure enough – sigh – they had to be yellow.  They’re buttercups!  😀

My plan for the book is to work primarily with my Derwent Inktense and then finish up with colored pencils when/if necessary for some finer detail work.

I don’t have full step-by-steps of the order I’d worked but for this page I’d tackled it like this:

-Then I colored the crown, using an image of Buttercup’s coronation crown for reference

-Then I worked on the ship.  I spent way too much time trying to find decent pics of either of the two main ships in the movie (The Dread Pirate Roberts’ ship or Vizzini’s ship) but the one drawn doesn’t perfectly match either.  If anything it’s closest to Vizzini’s but it has a skull and crossbones flag so…?  Finally I did my best approximation copying, of all things, a LEGO ship build. 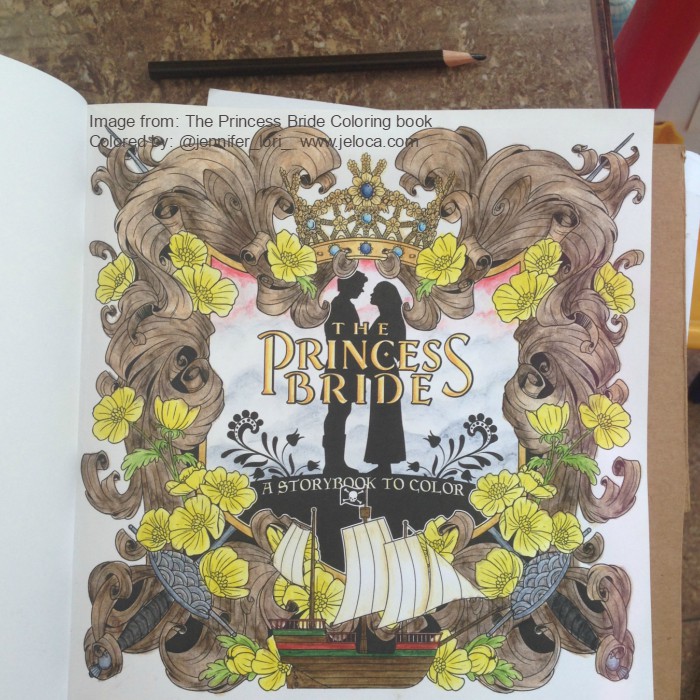 -Next I threw some gray and black into the two rapiers, and some pinks into the background, plus darkened the grays to give the illusion of mountains or far-off lands.

-The last thing I did at this step was to color the carved wood.  I did a HORRIBLE job with my shading, and, while this paper is pretty thick and didn’t bleed through at all, it does start to pebble after too many water applications, so I eventually maxed-out on how deep I could get the shadows.  That’s when I decided to jump right into some colored pencil.

In this image (above) I’ve worked colored pencil shading on the left side of the wood carvings only (so far), and I’ve used an eraser to lift out some highlights in both the wood as well as the sword handles.

If interested in any of the items I mentioned in this post, you can check them out below: