With Jakob’s 8th birthday coming up, and likely another Minecraft-themed event, I realized I never posted any of the pics I took from Henri’s 6th birthday, also Minecraft-themed, back in January.  I hadn’t returned to blogging then, so they obviously weren’t here, but I also never posted them on my Facebook, Instagram or Twitter accounts, which all link to each other.

I figured it would be fitting for an inaugural post to break in the ‘new’ blog, as well as officially link everything all together.

So.  When Henri had told me he wanted a Minecraft party I a) wasn’t surprised, because my house is ALL about Minecraft (I play too, my mansion has a giant working waterslide, thankyouverymuch), and b) wanted to go a little beyond just making a cake.  I generally try to tie in the invitations and the lootbags, for example, a pirate-themed party had eye patches and gold hoop earrings and spyglasses.  So I went looking around online.

I wasn’t completely sure what I wanted to do for the cake yet, and Henri kept wavering on if he wanted a giant Creeper, or an Ender Dragon, or a giant Creeper covered in smaller Creepers… so I put the cake off until it got closer to actually having to bake it.  I decided to start with the loot bags and get them ready and set aside.

There are a LOT of great ideas online.  I took a look at them, and went to a few stores to see what was available to me.  I ended up getting stuff at my local Dollarama, a grocery store, and Papillon (a Bulk Barn-type store), because 2 of those 3 are in the same mall and I had limited time/desire to run around.  I found graphics of the Minecraft inventory items online and knocked them together in Word, putting a frame around them only so I would cut them all out the same size.  I have included the graphics at the end of this post, feel free to download them and use them for your own projects!

Putting everything together, here’s what I came up with:

The lava buckets had me running around to a few stores.  My local Dollarama had a mixed-pack of mini Jell-O knock-offs, but only half the pack was orange or red.  I was really hoping to find red/orange (for lava buckets) and blue raspberry (for water buckets… which I had printed and managed to salvage at a later point).  In the end I found Jell-O cups at my grocery store, and used those.

The small plastic zip-top bags that the rest of the treats are in are craft bags from the dollar store too, and even the tape used to affix the images was from there.  Gotta love when you can find supplies as inexpensively as possible! 😀

The melon slices are sour gummies from the bulk store. 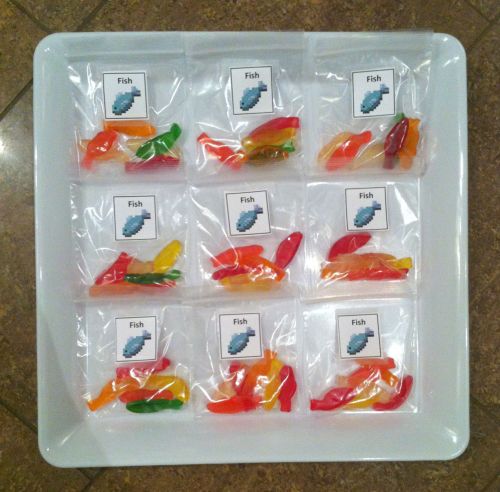 The fish gummies are also from the bulk store.  For all the inexpensive candies I just grabbed a few handfuls and portioned them out evenly once I got home.

The ‘gold bars’ are Hershey’s Gold Nuggets.  They’re a little more expensive so I counted those out.  (Plus, um, 2 for quality control… in my mouth). 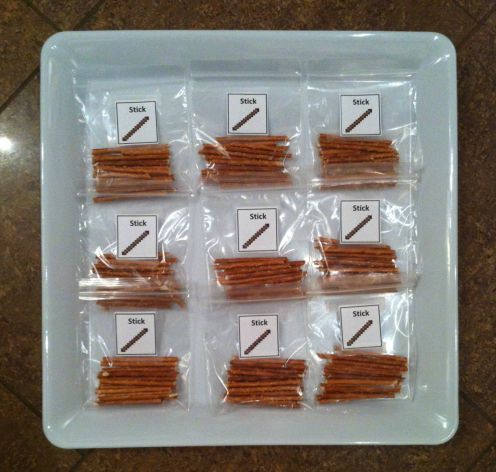 The sticks are pretzel sticks.  Surprisingly my dollar store didn’t have any, so I bought them at the bulk place and eyeballed ‘even’ amounts. 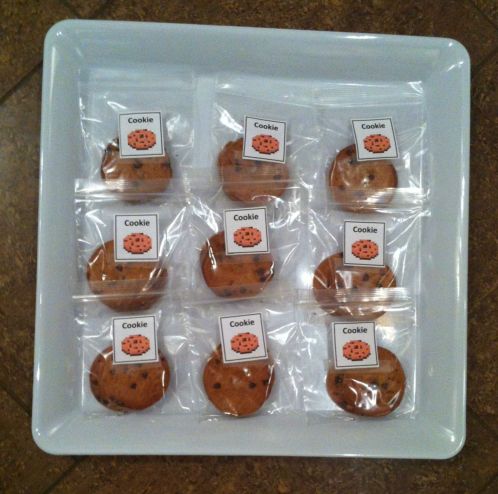 I’d been planning to get the cookies at the bulk store, they have the Voortman’s ones that you can buy individually, but I found a pack of chocolate chip cookies at the dollar store so that turned out to be cheaper, and each kid got 2 (only because there weren’t enough for each to get 3 in the pack).

Initially I wasn’t certain how to package everything together.  Then I remembered these boxes we’d had laying around at work.  They’re supposed to open the other way- the short ends.  So I ripped the glued sides open and re-taped them up with packing tape (ALSO from the dollar store) so they opened like a chest would.  If I’d planned that in advance I’d have made the chest graphic large enough to cover the whole side, and printed the word “chest” for the top.  But, in a pinch, this worked.

Everything fit nicely inside and I heard the kids loved their “inventory packs”.  If you try this yourself and can’t get ahold of boxes, brown paper lunch bags would be fine, or if you wanted to go EXTRA fancy you could get each child their own actual chest from the dollar store.

You can download and print the above images to make your own.  I copy/pasted a bunch onto an Excel spreadsheet so I could fit as many to a page as I needed.  The bag graphics were sized at 2″ tall by 1.75″ wide, and the chests were 2.25″ by 3.25″.

More from this party-

4 thoughts on “How to Make Minecraft Lootbags”