I’m sitting in bed, watching the Muppets’ Just For Laughs gala from this past summer, and knitting on Spidey. I was so optimistic about finishing it last weekend that I wound up the 2 remaining balls each of blue and red and brought everything along to TO, including my sock in progress and a spare ball of sock yarn. You know- to have something for the trip home.

The only thing I didn’t count on was the fact that each row takes almost an hour to knit, and that they keep getting longer! I managed to knit 8(!) rows on the way down and during a long car ride to my cousin’s shower. That’s 8 rows with 504-532 rows each.

I got 0 rows knit on the way home because I was so extremely car sick that I spent the entire 7 hour drive staring at the clouds in the sky. It was the only thing that didn’t make me nauseous.

But now I’m determined to finish for Henri’s birthday. Even if, as Maaike has suggested, I only knit 1 row per day. Eventually it will have to get done. 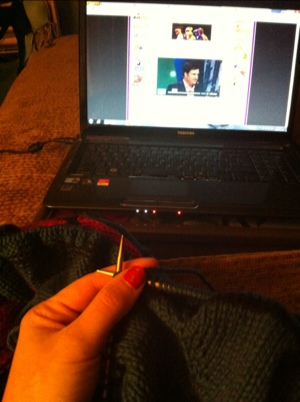 2 thoughts on “progress on a saturday night”