Yesterday was a good day (except for the fact that my kids and hubby are all sick, and my strep throat, which should be gone ‘cus I’m on my last day of meds, started hurting again).

First I took the boys for haircuts- no pic ‘cus I forgot.

Then I got a hair cut: 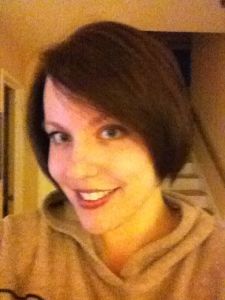 Then, in the evening, in a shock to even me, I finished my mom’s scarf!  I still need to twist the fringe and wash it, but SERIOUSLY?  After only about 6 hours, the scarf is off the loom!

I still can’t show it to you though, but pics will come once I give it to her.

My aunt was in town yesterday and was admiring one of the yarns I had out, and mentioned that she likes those twisted cowl scarves that you can loop around your neck a few times.  She also mentioned that her coats are black and brown, and that people are always telling her to add color.  So I decided I’m going to make her a woven cowl scarf.  I’m not quite sure yet how I’ll join the two ends later, but I’ll figure it out at the end.  (I hope, heh).

I chose the hank of Sweet Surrender Spark Sock Yarn from my stash.  I think I’d got it during one of the Robyn’s Nest sock  clubs.  The colorway is “Flower Power”, which is a variegated yarn, with repeating 6-7″ lengths of orange, blue, green, yellow and magenta. 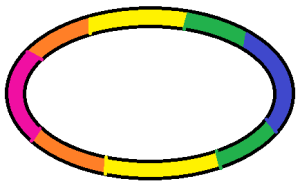 Kinda like this.  They don’t repeat around, but they repeat in the way the skein was dyed.  So I decided to try and keep this pattern in both the warp and the weave.  I tried to make the warp around about 70″ long which went right from the middle of the blue, down 2 repeats or so, and ended at the middle of the pink.  So the blue and pink would overlay in the same spots, but the orange, yellow and green would make solid areas.

It was awkward to find a place to warp, because the boys were downstairs so I was trying to do it upstairs where they wouldn’t get all tangled up in it, and I forgot to anchor the loom with a book or something heavy so it kept inching backwards.  Most of it is properly wound, but occasionally I hit a tighter or looser strand where my colors wouldn’t line up.  The tension evened out when I wound it, but my color blocking isn’t as perfect as I’d like.  Oh well.

The yarn surprised me by being divided into 2 hanks.  I wound them each into their individual cakes, and used about 6/8ths of one half for the warping.  The amount of yarn left over feels like at least enough to knit a short row heel or toe, so the leftovers will probably wind up as socks for me. 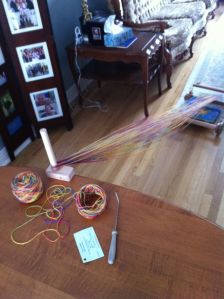 Once enough warp threads had been placed with 2 threads in every slot I wound it up and sat down to place all the hole strands.  Here it is, ready for weaving (after I throw a bit of waste yarn in there to even out the spacing). 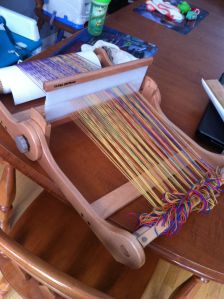 And finally, this shows how I plan to weave it.  I picked the width of the scarf hoping to match up the length of each color, and my goal is to get each row to be its own color, by starting at the proper spot and making sure to keep it going every time finish a shuttle. 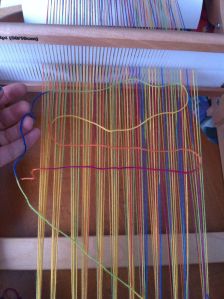 Unfortunately that’s all the crafting, weaving or otherwise, I can get done for now.  On New Year’s Day Yannick and I will be swapping houses with my inlaws as per the usual ‘weekend-before-exam” custom, and I need to get 36 Word pages of questions and answers from our school stuff organized and arranged into manageable bits to print out and tape onto index cards so we have flash cards to run through together.  The previous 2 years’ exams were easier, in a sense, because they were mostly math-based.  So while it was frustrating to learn all the formulas, once you knew how they worked, the exam was only as hard as the time spent working them out.  This year we’re learning all the biology and anatomy and physiology of the eye, and our exam will test us on the muscles, nerves, bones, parts of the eye, which nerve brings blood to which muscles, which muscles control which movements, which diseases cause which ocular symptoms…blargh.

3 thoughts on “maaike would be so proud”