It’s Hanukah and we surprise the boys every morning with a little gift for each of the 8 days.  Just little things like a matchbox-type car or coloring book, and occassionally a chotchka from the dollar store.  This photo was Jakob trying out his new horsie.  (Yes, same clothes as the party yesterday…the outfit did double-duty this weekend).  I have one of him actually facing me but it is really blurry ‘cus it’s mid-jump. 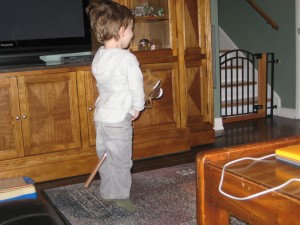 Henri got one too but wasn’t as interested as Jakob. 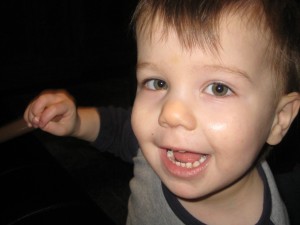 I LOVE this face!  I can’t believe he’s going to be 2 in just over a month…I don’t have babies any more, I’ve got big boys and I love them!!  I just can’t stop kissing these kids…I could eat them for supper, they’re so yummy.

I’ve got a bit of a sinus cold and took some Clorisiden (sp?) which makes me sleepy, so I didn’t risk another “knitting while impaired” moment and instead FINALLY got around to putting all my knitting projects into my iphone.  Yes, I only got the iphone 2 months ago, but this project has been delayed for almost 2 years.  I keep my own records similar to Ravelry, and was using a program called MobileDB in my Palm.  When I upgraded my last Palm to the TX it had a different OS and MobileDB just wouldn’t work right for me, no matter what I tried.  I caved and started copying my projects one-by-one into their own Memos, which worked quite well to view and update, save, etc…except I got lazy and stopped adding all the backdated ones.  So I had a small group of  projects from 2004-2007 in my Palm, along with everything from 2008-onwards, but the bulk (over 150 projects) was exported from MobileDB to an Excel worksheet and I was deleting each record as I added it to the Memos.  Then I got the iphone and had to retire my Palm…and now I had records in 3 locations.  Finally now everything is in one spot with 2 backups.

Getting all the projects in order gave me a chance to update my yarn ball too.  Didn’t I mention the yarn ball once?  I keep a few yards from the yarn for every project I knit/crochet and tie it on to this ongoing yarn ball…not sure what I’ll ever do with it, but for now I like having it sitting around. 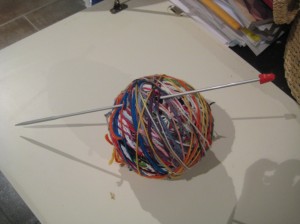 Finally, here is the progress so far on the Featherweight Cardigan.  It is fine yarn and will take a while, but I really like the coral color and I think it will make an addition to my wardrobe that I’ll actually wear.