So yesterday was a bust on the knitting front.  I knit one small 2″ circle (for what?  You’ll see!) after making breakfast, getting the laundry in, putting away Jakob’s clothes and whatever else I did.  Then Yannick got home, we had some lunch and headed outside to keep turning our front lawn into a giant litter box.  Ok- I kid, we’ve actually been spreading the giant pile of gravel into the hole Yannick and his dad dug to extend our driveway widthwise.  And moving the extra gravel by wheel barrow to our front walkway.  But in the end it kinda feels like we’ve got a giant litter box outside.  (And the illusion was helped by the friendly neighborhood animal who left us a gift in the center of the gravel).

There I was, standing bent over the gravel pit, using my hands to scoop out a trench to lay a drainage pipe, when my umbilical hernia popped out again.  (Did I mention that I now have an umbilical hernia?  It popped out the first time the day before leaving for Rhinebeck).  After that I wasn’t much good to help, so I raked up the last bit of the leaves then went inside to shower.

I got one more 2″ circle knit while Yannick went to pick up the boys from daycare, then it was the usual supper routine, followed by playtime and the struggle we’ve been having lately to get Henri to bed.  He’s got his 2 year molars coming in, plus he’s on a medication that could be making him hurt, and it has been making him very fussy and clingy at bedtime.  By the time he was in bed and Yannick was reading a story with Jakob, it was my time to get OUR supper ready.  We don’t eat dinner with the kids ‘cus Yannick isn’t home on time.  Anyways, by the time the veggies were ready, the meat barbecued, and the food eaten, it was 9:30.  I had NO desire to do anything at that point, I was just zonked.  We watched the Big Bang Theory/$#!% My Dad Says from last week and then I just crashed.  It felt really luxurious to get into bed at 10, with new sheets and a fully charged, game-loaded iphone- though it would have been more fun had I not fallen asleep 10 minutes later.

The boys got their daycare proofs last week and we’re giving in our orders tonight.  Jakob’s photos last year were really hot and cold- it was very easy to pick which of the two photos we would take.  This year’s choice wasn’t as obvious, but I think we picked the right one.

(Ignore the backgrounds, each image is shown in front of 9 different backdrops and we get to pick the one we want.  We’re going with a sports themed one this time).

First there is Jakob alone: 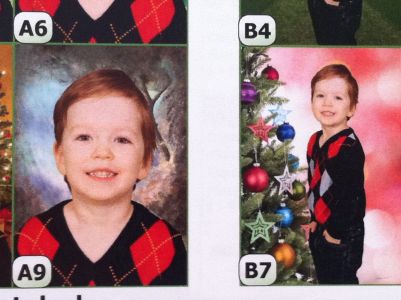 The close up isn’t bad, but we’re going with the Mr. GQ, I’m-all-cool-with-my-hands-in-my-pockets look on the right. 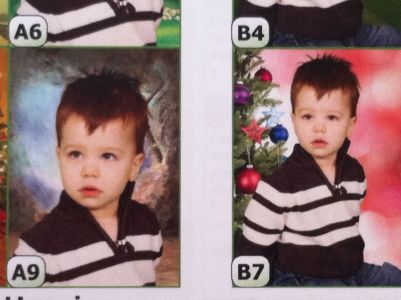 Henri was having a rough morning!  He was fussy, and didn’t want me to leave so he was crying when they went to do the photos.  We’re going with the pose on the right as well, though with the sports background.  Henri’s hair does this crazy stand-up thing when we take off his hat, and his teacher must have tried to flatten it ‘cus the front doesn’t usually make such a Musnters-esque widow’s peak.

Finally, whenever they have siblings in the daycare together, they do a group photo: 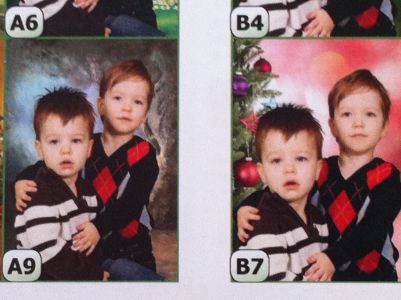 We’re not taking either of these!  Maybe if Henri was smiling, or at least not looking quite so upset.  As it is I have better photos of the two of them together.  (Plus Jakob’s protective embrace reminds me of those old-fashioned couples portraits, with the standing, stern husband and the seated, unsmiling wife).

I still can’t show you knitting progress, but I hope to at least accomplish some tonight.

Oh, and since some of you have asked, I’ll explain about Jakob and the oxygen monitor.  Jakob snores.  A LOT.  When we hear him through the monitor we call him Lord Vader, that’s how loud/bad.  When I first mentioned it to his pediatrician a while ago, he sent us for xrays.  They showed that his adenoids were “moderately large”.  We tried a round of Flonase to shrink his adenoids, but he started snoring again as soon as we stopped it.  We tried another month-long round with the same results.  Finally we were referred to an ENT a few weeks ago.

The ENT started the appointment by asking if we’d done an oxygen saturation test.  We hadn’t.  The visit ended there, with a referral for us to go rent the equipment.  (Out of pocket- ouch!)  So basically the test was similar to the finger monitor they put on you to check the oxygen levels in your blood/body, but we put it on his toe.  I waited until he fell asleep then attached it to his toe, taped it in place and put a sock on him.  Then, to make sure it didn’t get kicked off or detached in the night, when I was ready for bed I slept in his room with him.

The next day I brought the machine back to the sleep clinic and it generated a report showing his oxygen levels and heart beats during the night, as well as showing markers every time his O2 levels dropped more than 3% for more than 5 seconds.  Next Wednesday we’ll meet again with the ENT to go over the results.  If the results are within the normal realms, then we’ll ignore the snoring for now and wait it out.  If they show that his O2 levels are dropping out of the norm, then most probably he will have to have his adenoids/tonsils removed.

I’m really not worried about him having the surgery, should it get to that point.  A) I just had it done- well, the tonsils anyways, and though it sucked worse than anything I can remember, I know the recovery is much worse in adults than kids.  B) my nephew had done the surgery at the same age as Jakob, and is now 13.  I asked him what he remembered and all he remembered was eating a lot of ice cream.  Either way, we’ll see what the doctor says next week.