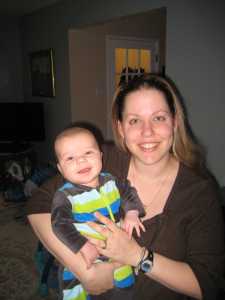 Mommy with Henri at 13 weeks old.

Don’t ask me to remember what I did in weeks 13 or 14.  I keep meaning to sit down at the computer, and I do get time to read emails, etc, but either I go to post but haven’t synced my camera yet, or I have the photos but no time to do the post.  Sigh.  Soon, I’ll get things back on track. 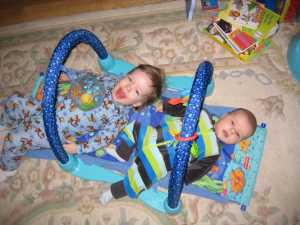 I know it’s getting easier to get photos of the boys together, because all Jakob wants to do is play with his brother.  And kiss him.  And read him stories.  And kiss him.  Did I mention he wants to kiss him?  Thankfully I’m breastfeeding, or Henri would have had almost a cold a day from all the germs Jakob brings home and slobbers into his mouth.

Mommy with Henri at 14 weeks old.

Not the most flattering photo of either of us, eh?  For Henri- excuse the triple chins- it’s the angle of his head.  And the horizontal stripes.  Ugh, NOT a good look for him!  As for me, well that was the day I first came home with the bangs and the blue hair.   Unfortunately I left the salon with my hair still damp and didn’t realize until it had dried that instead of having blonde hair with high- and low-lights, my hair was pretty much brown.  I went back the next day and had it fixed, so you’ll see that look in next week’s photo.  MUCH better, if I do say so myself.  As for the bangs, loyal readers will remember them since I tend to grow them out then cut them again, over and over.  Most people think I look more like “me” with the bangs, I’m likely to agree although I’m not sure if I look too young with them.  I had my hair in a ponytail the other day when I went out with Henri, and between the jeans, bangs and blue streak I’m sure the people I saw wondered what kind of sitter this poor kid’s mom left him with!

This might not be chronologically accurate, but sometime in the last few weeks I finished the first Toasted Almond Toe-Up sock (TATU sock).  These are my “keep in my purse for found knitting time” socks, the ones I was complaining about not finding the repeat on.  I finally found it!  Do you see it?

If you look near the toe of the sock you can see two blue stripes with cream and brown in between.  You can see that same pattern at the heel, and then again for the cuff.  That means everything from end of the toe increases to the beginning of the heel is ONE REPEAT of the colorway.  Can you believe it?  I’ve never seen a repeat this long before!

I tried to find the matching repeat for the other ball for the other sock, but I have a feeling the sock might have been wound inside out, as I found a similar blue-cream-blue section, but the following colors didn’t quite match up.  I did the best I could to mark a starting point that was similar, and now I’m just going to let the yarn do its thing.  I haven’t cast on yet but it still lives in my purse waiting for the next long wait at the doctor or somewhere.

I’ll leave you with this last photo of Jakob because I couldn’t resist posting it.  I love this kid!  I can’t believe he will be 2 next month!!  He’s accomplished so much in the last few weeks- no more bottles (although he still gets 2 fingers of milk in a sippy cup before bed), he can officially jump, and he’s developped a HUGE appetite for books.  I have to put him down for a nap with a book so he can wake up and start “reading” it.  I’ve even caught him “reading” to Henri!  Oh, and today (not part of weeks 13 or 14, but whatever…) he rode a real tricycle for the first time and pedalled forwards by himself!  Yay Jakob!