If I wait until I’m fully caught up to show some current knits, then I might be playing catchup forever.  Well, until I’m sidelined by a newborn.  Anyways…I thought I’d sneak in a second(!) post today to share a quickie with you.

This is the chemo cap that my mother-in-law requested for her cousin.  For a last-minute project, it was great!  The yarn was on sale for $1/ball, and it took me exactly one ball with enough left over to add to my project ball and still have a few “emergency” yards to give the recipient.  I’d bought 2 balls just in case, but I think that instead of returning the second one I’ll keep it and knit a silly little stuffed animal with it one day.

Size:  21″ (the smallest size).  I don’t know how big of a head the recipient has, but my mother-in-law had tried on the one for my cousin, and it was a good fit on her.  She thinks her cousin has a slightly smaller heat, but I think that when the recipient has undergone chemotherapy, it is probably better to be a little looser than tighter so it doesn’t irritate.  In any case, she is going to bring with some elastic thread when she gives it to her cousin, so if it is too loose she will snug it up for her on the spot.

Yarn:  Bernat Boa Lash in the Silver Fox (grays with a tiny shot of blue/steel) colorway.  I used about 90% of 1 ball. 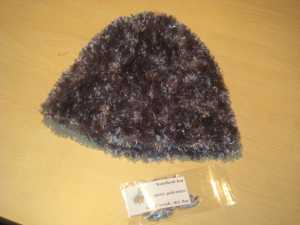 4 thoughts on “sneaking one in”