I can’t post photos until the computer is reset up in the new office (!) but I can still post from work while I’m here.  (Yup, I work Tues-Sat, so I’m here today).

First off is a cute little test I found over on AliP’s blog.  I quite like my results!

What Should You Be When You Grow Up?
Also, before the office is officially complete, I thought I’d show you a little plan of what we’ve done.  Excuse the non-professionalism of these “sketches”, as they are something quick I whipped up in Paint.  But it will give you an idea of the work we had ahead of us and what we’ve managed to accomplish so far.

This sketch (above) shows the original basement (not to scale!).  When we bought the house it was completely unfinished downstairs and we chose not to do any work down there right away because we wanted to go through a Winter/Spring and make sure there was no water infiltration/foundation issues or anything.  The ceiling is completely open, some walls have drywall and others don’t.  The floor is concrete.  And until recently, all but minimal walking space was full of the 100 boxes we hadn’t unpacked from our move.
After we got pregnant and knew we needed to create somewhere for my office, we started drawing floor plans.  We needed to fit an office downstairs, plus one day we’d like to add a bedroom (so we’d still have a spare one, or for Jakob when he’s older and wants to move downstairs).  We’d probably like to put a bathroom near the laundry area too.  You know, when we win the lottery.
At one point I was supposed to get the corner with the oil tank, and later I thought I’d get the upper right corner but only until the sump pump, which made for a natural division.  Luckily Yannick realized exactly how much crap craft/art supplies/books/yarn/etc I have, and knew that if I didn’t have enough room for it all, it would still end up all over the house.  So he decided to surprise me with almost a third of the basement all to myself! 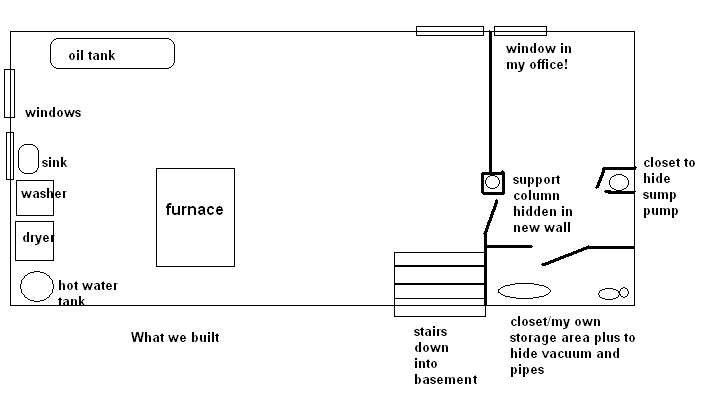 This photo (above) shows the walls that Yannick and his dad put up.  They divided the area evenly between the two windows so I will have some natural light in the office.  They built a small closet to surround the sump pump and another one to block off the back area with the pipes and central vacuum.  Both closets have actual closet doors on them.  I will never need to go into the sump pump one (and really, it is exactly the same size as the floor opening, so it is only there to hide the pipes), but the one at the back has quite a few feet of storage space within for anything I don’t want/need out.  What is also cool is that the wall they built to the right of the stairs now allows us to put up a railing, as the original basement had the stairs open on both sides. (Really, nothing was finished down there). 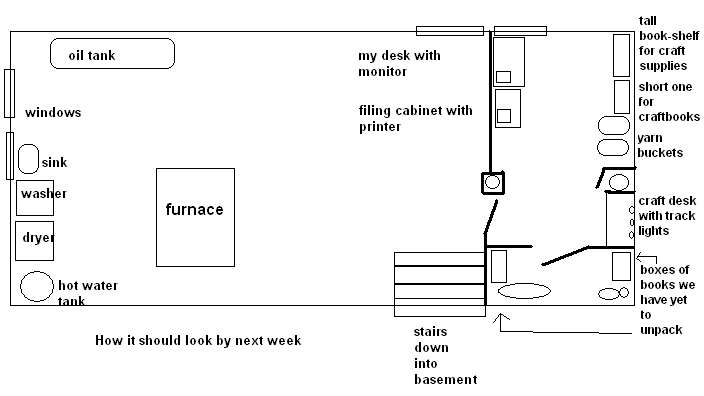 Finally, this photo shows how I imagine the office to look by next week, after the furniture is moved in and I get a chance to organize a bit.  My computer desk will go under the window with my filing cabinet and printer next to it.
Behind where I sit will be my tall bookshelf (currently hiding in the garage since the move) for all my small buckets of craft supplies and computer supplies (ink, paper, cds, etc), next to which will be my short bookshelf for knitting/crochet/craft books and magazines.
The rest of that wall until the mini closet will be taken up by my Rubbermaid buckets of yarn, and I really hope I will have room for all of them!  Yannick’s parents had suggested I hide the yarn in the back storage area with the vacuum but they don’t realize exactly how often I go into those buckets!
The open space between the two closets is where Yannick is going to build me a craft desk with track lighting over head.  That desk will give me space to wrap gifts, craft, set up my knitting machines, etc.
The storage closet will actually be used to store the 6 or so huge boxes of paperback and hardcover books that we have nowhere to unpack yet.  We had wanted to build a library wall in our den, but we’re currently using that wall for my parents’ old wall unit and it is working out well to hold movies and toys and stuff, so for now we’re stumped on where to put our book collection.  Luckily they will at least be neatly packed and out of the way, and Yannick has promised to put the boxes on risers so if there were ever to be any water issues with those pipes in the corner, we shouldn’t end up with damage to the books.
So that’s probably more than you wanted to know about my basement and office.  I’m very excited and looking forwards to getting it all organized.  The best part about having it ready is that tomorrow or Monday I will be able to move Jakob into what used to be the spare bedroom and get his “big boy” room all set up, and then get the baby’s room ready too.  I don’t want to jinx anything, but so far we really seem to be on track!

3 thoughts on “something for the weekend”