It has come to my attention that I haven’t posted any photos of Jakob in his latest Hallowe’en costume.  I know, I know, I’m a bad blogger/designer/Mommy.  It’s just that I haven’t decided if I want to try and publish the costume or self-publish it, and if I were to publish it outside of my own blog then sometimes they don’t want the pattern to have been viewed previously.  (“They” being any print or online magazine or pattern source).  So until I figure out what I want to do with the pattern, I’m hesitant to post it yet.

I can share what happened last weekend though! Sunday was the second half of the Beth Brown-Reinsel workshop, all about Gansey sweaters.  We learned what makes a traditional Gansey (Guernsey), what yarns to use, and what elements to incorporate. 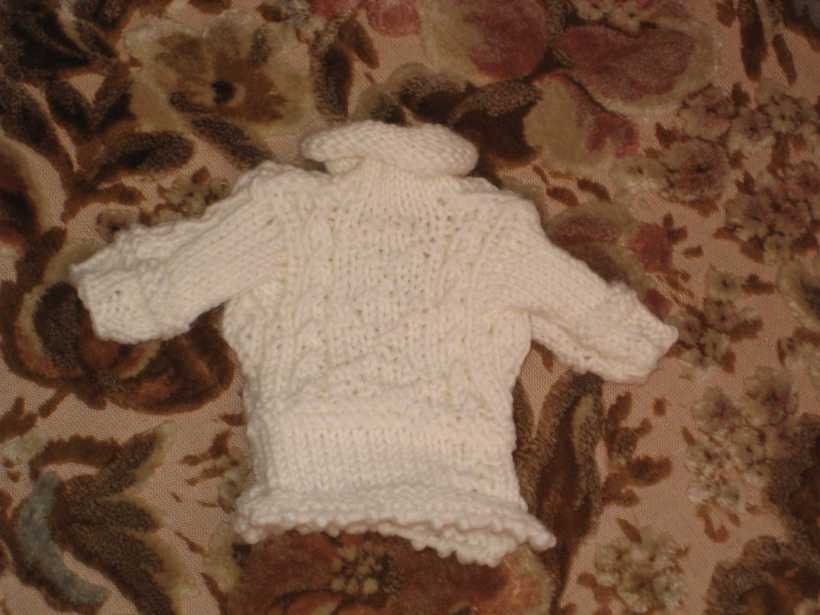 We also knit our own little ganseys.  Don’t quote me, but if I may toot my own horn for a second (did I really just type that?) I think I was the only person to finish the sweater in class before the end of Sunday.

The sample gansey has a Channel Islands cast on, an overlapping garter welt, initials (not that you can see them) in the plain section, a diamond pattern on the front and back, underarm gussets, shoulder straps, and in my case, a rolled neck.  I wanted the resulting sweater to be somewhat functional, and the two other neck options looked really tight and I was afraid it wouldn’t fit any of Jakob’s toys.  It really cracks me up how the finished sweater looks so bulky due to the construction- lying flat on a table it looks like it was made to fit a bodybuilder with huge biceps and upper body.

And yet, on a willing model, it actually looks really cute and proportionate!  After some searching around the house, Monkey’s long, skinny body looked like just the thing to fill out the sweater, and the fact that he has no discernable neck isn’t an issue here, as the rolled neck stretches nicely.

Now the best-dressed Monkey in the house only wants to lounge around in his hand-knit gansey, teasing all the other toys about being the favorite.  Cheeky Monkey!

I’m going to end this post with an email that Barb, one of my guild members, sent around to the Montreal knitting groups last week.  I know most of you have probably already seen this, but just in case, I wanted to spread it around.  It’s a really unfortunate thing that has happened, and while I know it wasn’t a targetted knitting attack, it still makes me feel queasy that it happened here, in my city.

This past Monday I had a visitor from Vermont staying with me—she was not any ordinary tourist, she is Beth-Brown-Reinsel — one of the knitting community’s A-list teachers and historians with a specialty in Gansey sweaters—how they evolved and how to make them. She was here teaching a workshop on Ganseys and another on Latvian Mitts for the Montreal Knitting Guild. Her suitcase containing all of her
workshop samples and reference books (some out-of-print) was stolen from the trunk of my car while I was giving her a tour of our fair (?) city—a city she was so excited to be finally visiting.

I need the public in general (not just knitters) to keep a lookout for this black suitcase containing 5-6 sweaters (some adult, some children), ornately knit Latvian mitts, approximately 20 mini sample sweaters which represent all the workshops she teaches, a pair of Scottish Sanquhar gloves, a multi-coloured tote bag-the one from Interweave, three books on Latvian mittens, and other items we may have forgotten to list. On our tour we visited the Old Port, stopped briefly by the McCord museum near McGill, then up to St. Denis and Duluth (Plateau area) to meet up with friends. I would ask people who live in these areas to pay special attention as there is the chance whoever took the suitcase will dump it once they realize there was no street value to what they stole.

That is not to say these items are of no value. They are actually of tremendous intrinsic value to those of us who understand what it is like to knit something from one’s own hands and have it worn by your family; the value of a research book which records historical data but is now, sadly, out-of-print and from another country far away, making it that much harder to find a second-hand copy; handknit items illustrating specific historical and cultural techniques which have been personal gifts and mementos from travels afar. And from a teaching perspective there is nothing like having something tangible to pass around the class that the students can touch and view intimately for details which may not be caught in photographs. We
all know knitters are “touchy-feely” people.

Should the knitting gods be merciful and someone does come across the suitcase please take it to a local police station, or if unsure where the nearest station is, flag down a police car and give it to them. There is a police report on file and they will contact the appropriate person to retrieve the suitcase. And if not for the love of knitting and doing what’s right, then do it for the financial reward which I am posting. Just leave your name and contact info with the police so I can send it to you (the finder of the suitcase).

And for all the knitters in our community, please support Beth by buying her book and patterns so she can fund the replacements for her workshops—she is at knittingtraditions.com and on the patternfish website.

The more people who know, knitters and non-knitters alike, the greater the chance of someone clueing in
if they see a black suitcase just sitting there. I am taking inspiration from a similar incident which happened this past summer to an esteemed quilter in Nova Scotia who had her samples suitcase also stolen from her car then found a couple of weeks/months later by the side of the highway and the fellow who found it knew what he’d found because the quilting community had gathered forces and publicized like mad. Thx to all who can get the word out.